We just got back from 9 awesome days at the Mouse. We spent five different days at Disney's Animal Kingdom. In the coming days and weeks, I will delve into restaurant reviews, a report for each day, a review of our time spent at Kidani Village, and some of the great information and tips for everyone. Plus, we took a ton of photos. But first, I want to talk about how great the cast members are at the Animal Kingdom. 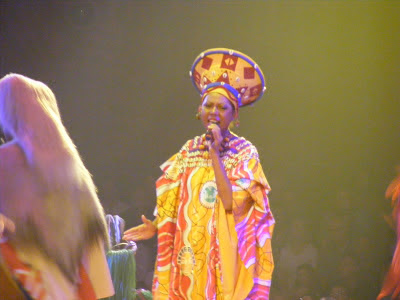 At first, I have to say that cast members at the Animal Kingdom have a lot more guest interaction than in other parks. I spent 18 years as a docent at the Bronx Zoo and my function was, for the most part, to relay information about the animals to the public in an effort to raise awareness of the plight of those animals. The Animal Kingdom has numerous cast members that perform that function, interacting with the public in a teaching capacity, which you don't find at any other park. Cast members are located throughout the animal exhibits. And, of course, there are the Kilimanjaro Safari drivers (my choice for coolest job at Disney other than Imagineer).

I would like to take a moment to recognize some of the cast members who made our most recent trip magical. First, I have gone on the safari at least 40 times in the past but, on our last trip, August 31st, we had our best driver to date, Nicole. She was a wealth of information and she played the role so well. At one point, she even cracked a funny joke about the African music on the radio. The cast members located throughout the Maharajah Jungle Trek are all excellent. We especially got some good information from Andrew. I also have to thank Thom from Finance who let me know there was a recent meeting on the herd of zebra set to occupy the safari and that they are all doing extremely well.

I would like to thank Temalo (from Botswana) and Mbali (from South Africa) who spent time with my two kids teaching them how to play Mancala, a popular counting strategy game, which we are currently shopping around to buy for upcoming family game nights. There was also Samantha who we ran into at the gibbons one day and the crocodile at Dinoland another. She too, was a wealth of information and so helpful. And finally, there was Katie. She was working the parade and was able to get me and my family reserved seating for a later Lion King show. Well, the seats were amazing and my kids got to participate, including demonstrating the giraffe noise to our section and to march in the big finale.

Thanks Katie, you are the best and my family will never forget it.