As we all know by now, Disney has purchased Lucasfilm and all that it encompasses. ILM, Skywalker Sound and the rest of the lot are now Disney properties much like Marvel and ESPN. This, of course, includes the Star Wars franchise. And Disney has already said there will be more Star Wars stuff in the parks. Plus, Disney will be releasing more Star Wars movies in the future, starting in apparently 2015. 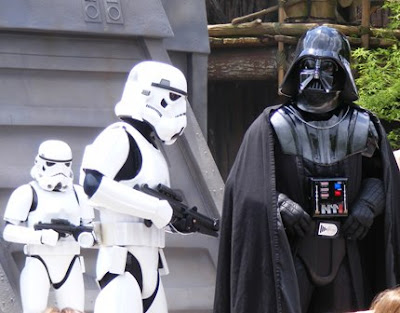 I have already seen comparisons between the Avatar announcement and this one. There are, of course, several major differences. First and foremost, Disney has had a long standing relationship with Lucas and none with Cameron. Secondly, and most importantly, Disney did not buy Avatar, they just made a deal for theme park rights to the franchise. While Disney has a real vested interest in the popularity of Star Wars and will do all it can to promote (and cross promote) any new Star Wars products, the same does not hold true for Avatar. Whether or not Avatar does well, really means nothing for Disney.

Or does it? It seems to me that Avatar is a direct competitor to Star Wars for the sci-fi dollars especially as it seems the Avatar sequels will be out during the same time frame as Star Wars 7 and the Avengers 2. Disney, when they announced the Avatar deal made a point of talking about how Avatar could come to other projects like the Hong Kong and Shanghai parks. Guess what, in the announcement of the purchase of Lucasfilm, Iger made a point of saying Star Wars would be added to Hong Kong and Shanghai. You think Disney would put Avatarland in Shanghai or Star Wars land? I doubt it would be both.

So now, Disney will be building a giant Avatarland in the Animal Kingdom only. Will Disney still move forward with the Avatar project at the Animal Kingdom while now owning a rival science fantasy franchise? Would Disney build Star Trek rides while owning Star Wars? Probably not, but as of last week, the once thought dead Avatarland project sprung back to life in the form of leaked blue prints.

Take another peak at those plans. The word Avatar or Pandora does not appear in any form on those blueprints. They are generic without any indication of what they are meant for. There is no indication that it is earmarked for the Animal Kingdom even. It seems rather strange that just a few days before the announcement of the purchase of Lucasfilms (which they have been working on for some time) blueprints for a new major area are leaked. Maybe those plans aren't for the Animal Kingdom or Avatar after all. Maybe they are for a new Star Wars area at Disney's Hollywood Studios or for one of Disney's foreign parks. If Disney wants to build their own Potter, the Star Wars franchise is much more likely to create that buzz than Avatar.

Posted by JamboEveryone at 10:58 AM