Many hardcore disney fans, myself included, always get a little disappointed when we see that dragon head at the entrance to the Animal Kingdom. For those of you who don’t know (and I am sure there are not many of you reading this that don’t), there was to be a land in the Animal Kingdom themed to mythical animals, like dragons and unicorns. It was to be built where Camp Minnie-Mickey currently sits. The Camp was supposed to be merely a temporary land until Asia was completed and construction of the Beastly Kingdomme could begin in earnest.  It seems the Disney execs felt another land was needed for the opening of the park to help with the anticipated heavy crowds so they threw together the idea of Camp Minnie Mickey on the fly. 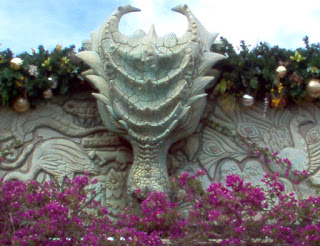 But the Beastly Kingdomme was to be truly amazing. Here’s an early release from Disney as to what the land was to be:

“Beastly Kingdom is the realm of make believe animals, animals that don’t really exist, out of legends, out of fairy tales, out of storybooks. Like our legends and fair tales about imaginary animals, this land is divided into realms of good and realms of evil.

The evil side is dominated by DRAGON’S TOWER, a burned, wrecked castle inhabited by a greedy, fire breathing dragon. He hordes a fabulous treasure in his tower chamber. The castle is also inhabited by bats who speak to us from their upside down perches. The bats have a plan. They enlist our help trying to rob the dragon and fly us off on a wild chase. At last, we meet the fire-breathing dragon himself and barely escape un-barbecued.

The good side of this land is ruled by QUEST OF THE UNICORN. An adventure which sends us through a maze of medieval mythological creatures to seek the hidden grotto where the unicorn lives. There is also FANTASIA GARDENS. A gentle musical boat ride through the animals from Disney’s animated classic, “Fantasia.” Both the crocodiles and hippos from ” Dance of the Hours” and the Pegasus, fauns and centaurs from Beethoven’s “Pastoral” are found here.”

Other details have been rumored from its original concepts. It is thought that the bridge leading to the area was to be guarded by a troll underneath. There was to be a Mother Goose shop. Perhaps coolest of all, there was to be an outdoor eatery surrounding a small pond. Every so often faint bagpipes would be heard and the loch ness monster would surface from the center of the water.

Unfortunately, Disney execs wanted to make sure that Dinoland was there for the opening and before the Beastly Kingdomme could be built, the funds for it were pulled. But is it gone forever?