Looking for Dragons in Disney World


Dragons are cool. Real cool. They are easily the most interesting of all mythical animals. Even cooler than the Yeti, and yes, I consider the Yeti a mythical critter. Dragons are, well, from everywhere. For some reason, a giant monstrous lizards/dragons reside in myths across the world, China, Europe, South America. 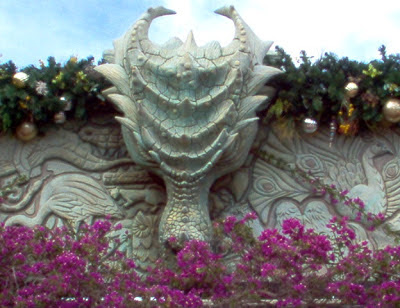 And the dragon was meant to be an integral part of Disney's Animal Kingdom. As most know, in the area where Camp Minnie Mickey sits, there was to be the Beastly Kingdom (or Beastlie Kingdomme). This land was meant to have a lot of cool attractions, the greatest of which was the Dragon Tower. The attraction was to be amazing and extremely immersive. The ride would be held within a crumbling black castle tower. The queue would begin in the courtyard where the ruins would be accompanied by medieval music. You then would work your way through the abandoned castle filled with broken weapons and artifacts. Faint whispers could be heard here, and this is where the Disney magic begins.

You see the Dragon's Tower was to be filled with bats. Gigantic, intelligent bats that wanted you to help them battle the dragon that has taken control of their home. You would encounter a group animatronic bats drawing up battle plans for the big showdown. When you arrived on the scene, you would have been recruited. That is, you would have boarded melted cauldrons that were, in fact, your coaster car. The bats would fly you through the castle to do battle. The dragon, on his heap of gold and gems, would breathe fire and the battle itself would head outside into a magical forest until you and the bats eventually become victorious.

Ultimately, there was no money for Dragon Tower and the rest of the Beastly Kingdom. Instead, Disney wanted to build Dinoland and Countdown to Extinction. It was cheaper since the main attraction was essentially a clone of the Indiana Jones ride at Disneyland and Disney had in production a dinosaur animated feature for synergy. So, the Animal Kingdom never got its dragon.

Or did it. There is, of course, a dragon in the logo walking alongside an elephant and a triceratops. There is also a dragon head over one of the ticket booths. But, there was once a dragon in the park itself. When the park first opened, there was a little ride called the Discovery River Boats which plied the rivers around Discovery Island. On this boat trip, you would come across Dragon cave. Within the cave lived the Dragon king. As the boats passed the cave's mouth, one would hear growls and see blasts of flame. The dragon himself could not be seen, but he was there. That is, until the boat ride closed a little over a year after the park opened. Now there is only a rock sculpture visible from the Camp Minnie Mickey bridge that looks like a dragon's head.

So now, we are getting dragons. Not in the Animal Kingdom where they belong, but in new Fantasyland. Disney has launched a website dedicated to the sightings of the massive flying creature and someday soon, we will find out what all the hype is about. What is this dragon they are talking about? A new attraction? a new show? A new feature to the fireworks?

Is Beastly Kingdom truly dead? Probably. Is Avatarland dead? No one seems to know. But it is fun to speculate that the dragon born in fantasyland will then make its way to the Animal Kingdom for a show there. Or maybe, since they seem to say the dragon in fantasyland is good,  there will be an evil counterpart at the Animal Kingdom that will be a part of a revitalized Beastly Kingdom that replaces Avatarland. After all, why build Avatarland when you own Star Wars? Why fly around on those strange animals from Pandora, when you can battle the real deal in myths - the evil dragon.

Posted by JamboEveryone at 11:03 AM