Changes Coming to Character Meet and Greets:  Last week we reported that Mickey and Minnie Mouse meet and greets would be moved from their current location at Camp Minnie-Mickey to a new area being created where the Beastly Bazaar once stood.  Today we can report a few more tweeks to these locations.  According to a report by adisneyworldafterall.com it appears Donald and Daisy Duck will be moving to the Discovery Island boat dock area while characters from Winnie the Pooh will soon be appearing at the aforementioned Camp Minnie-Mickey. 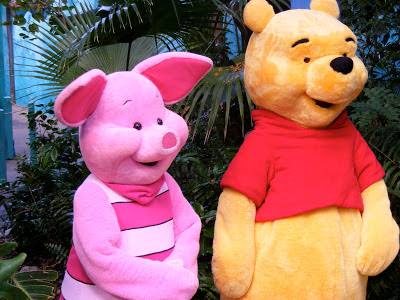 Nothing all that earth-shattering here, but there is a something worth mentioning in the use of the Camp.  The worst kept secret is that the new Avatar Pandora area will be built in the Camp’s current location.  So why start a new meet and greet there?  Can this be interpreted as a clue to exactly how far off construction of Avatarland is...

Celebrating Frog’s:  Today’s posting on the Disney Parks Blog tells us about an event planned for March 7 at Disney’s Animal Kingdom.  (an event they appear to have no name for...oddly)

When guests visit Rafiki’s Planet Watch, they will be able to make toad abodes (special homes for frogs and toads) for their backyards, try leaping like a frog, listen to frog calls, examine amphibian adaptations, and meet some cool amphibians and their keepers...

Guests also can learn about the critically endangered Puerto Rican crested toad, which we are raising at Disney’s Animal Kingdom and releasing in their native habitat to re-populate the species in an area where these toads once thrived but are now considered extinct.


Truth be told, we here at Jambo Everyone absolutely LOVE these kinds of events.  They may not be big flashy media-filled events but they are just the kind of fun things a park focused on conservation should be doing.  Kudos to DAK once again!

Baby Gibbon born at DAK:  A few Twitter reports suggest a new baby gibbon has been born and can now be seen in Asia.  Disney usually releases photos of these milestones, but they have yet to with regards to this one.  As soon as they do, we will let you know.

Have A Wild Time this week!!
Posted by JamboEveryone at 4:14 PM