There is a simple way to tell the difference between male and female ostriches. Like most birds, the colorful one is generally the male. In the ostrich that means the male bird has deep black feathers with bright white primaries and tails. The females are a drab brownish gray. Males in the bird world are more colorful so they can attract the females. Females need no such tricks. 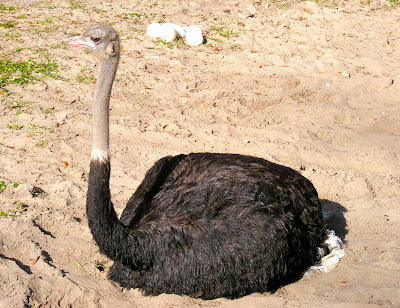 Then there is Sally. She resides at Kilimanjaro Safaris. And she is black feathered. Sally wasn't always like this. For years, she was brown just like any other female ostrich. There was a male, too. But he was causing problems. Apparently, they didn't like it that he was attacking the ride vehicles. So, he had to be removed from the exhibit and that left the safari with no male ostriches. The next time Sally molted, she grew in black feathers.

This is rare, but not unheard of. When there are no male ostriches, one female changes color so that it appears there is a male around. Males tend to protect young and territories from predators. They want the predators to think there is a man around the house to fight off potential problems. So Sally is now that "male."

So they the next time you ride Kilimanjaro Safari, say hi to Sally.

Posted by JamboEveryone at 10:46 AM