Disney's Animal Kingdom is fast approaching its 15th birthday.  Despite its relative youth, the park has a few attractions and shows that are now extinct.  And one of my favorites is the Dinosaur Jubilee.  This attraction was there for opening day and was a late add on to help add "things to do" with a park that essentially had two rides and a few shows. 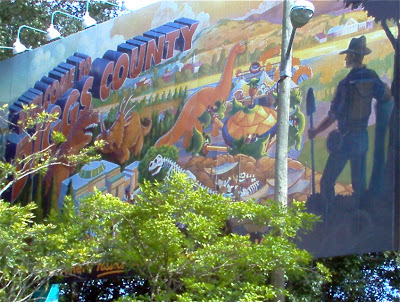 The Jubilee was essentially a tent located where you would find Primeval Whirl now.  You would walk out of Countdown to Extinction and head to Chester and Hester's shop.  On the other side of that, there was a big tent housing Dinosaur Jubilee.  The tent was nothing fancy, for sure.  It had the look of something thrown in at the last minute and something that could go at any moment.  Essentially, this was supposed to be where the scientists of the Dino Insititute showed off some of their finds.  In the tent, the displays included triceratops skulls and full skeletons, extinct fish over head, a plesiosaur, a pteranodon and, of course, a t-rex as well as other dinosaurs.  The full skeletons were kept in poses similiar to what you would see at a Natural History museum, and there were ferns and other plants from the era mixed in with the models.  These were not, after all, real fossils.  Those were next door at the Fossil Preparation Lab.

In 2000, the name of the attraction changed to Dinosaur Jubilee 2000 in honor of the milleunium.  This didn't have nearly the backlash as the changing of EPCOT Center's name.  With the name change, it added some interactive versions of a mammoth and a sabre tooth tiger that were not skeletons.  It was not enough to keep the place open.  By the end of the year it closed to make way for Dinorama which opened to the public in Fall 2001.

To be honest, I would love to see something like this make its way back to Dinoland, USA.  It would make sense to "show off" some of the Dino Institute's finds.  I would love to see some educational exhibits done with Disney charm and wit.  The old Jubilee offered guided tours by the students of the Dino Institute, which is a fun way for the CMs to mix with guests which they do so well at Animal Kingdom already along the paths that have living animals.  Dinoland is also an amazing place for little tidbits of humor (if you don't believe me check out the board near the Boneyard), and a guided tour or talk would do so well.  Disney imagineers could also extend the fun they have in and around this section of the park.
Posted by JamboEveryone at 10:25 AM