Why I Am Not Thrilled About Disney Springs


We don’t often comment about Disney related topics outside the world of the Animal Kingdom, but this week’s news regarding a major renovation plan for Downtown Disney (DTD) was just too much for this WDW fan to ignore.  (Plus, I promise to tie it into DAK.)

Now, I am not going to spend too much time here commenting on what I think of the plans themselves.  (Though I will say the name sounds more like a condo community to me and that people will certainly mistakingly board a bus to the Saratoga Springs Resort as a result!)    Sure, they are impressive and DTD needs some serious work.   But they are also representative of an enormously involved and expensive project.  We are talking about building bridges, elevated platforms and parking garages here!  This is big, really big.  And I am not sure this is where I want such a huge amount of effort and capitol being spent to “enhance my guest experience”.

Maybe I would make a terrible CFO, but I personally think that as the prices at Walt Disney World continue to head closer and closer to the ridiculous, investment should be made into making the theme park experiences “more magical” and not into a a glorified shopping mall.  And what’s more, I don’t think DTD works all that well as a “magic maker” no matter how big you make it or how many high-end stores or restaurants you add to it.

Guests do not come to Walt Disney World for shopping and non-Disney dining experiences.  They may be a nice add-on for some folks, but people come for the theme parks.  How many people truly journey to WDW, spend hours in the parks and then want to go shopping and dancing afterwards until the wee hours of the morning?  They want to spend as much time as they can in the parks, they want to get there at rope drop, take advantage of Extra Magic Hours and see all there is to see.  Because, if for no other reason, they spent a fortune on their admission tickets! 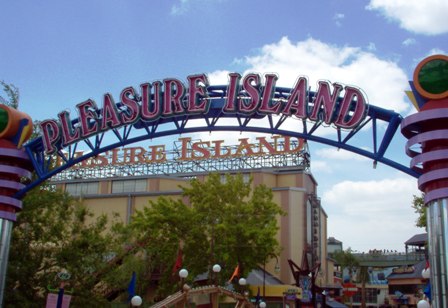 Now, I know Disney has been proactive over the last few years with park expansion, and they deserve credit for that.  The New Fantasyland, Cars Land, and the upcoming Avatar addition are all certainly major in scale.  But if they are willing to pour money into expansion and construction more of those types of projects are what we as guests want and are craving.  If you think guests need more shopping and dining options then add them to the parks or to the resorts, if you must.

As far as we here at Jambo Everyone are concerned, we would like to finally see some night time specific attractions/shows at the Animal Kingdom rather than more shops I probably can’t afford to buy anything at anyway..  (More on “DAK at night” later in the week...)  And how about fixing the darn yeti, for crying out loud!

I also recognize DTD is in bad need of help, but it is certainly in no need of expansion as far as I can see.  Half the property is empty whenever I go there.  Vacationers only trek there for the World of Disney store, which let’s face it, is the only reason worth fighting the traffic and poor bus service.  And most of the time that store is a chaotic mess!!  You want to do your guests a real favor?  Expand that store to a near ludicrous size so people can navigate it without feeling like rats in a cage!  Make better use of the space you have and save some cash for, say, a new panda exhibit at DAK?? (wink, wink!)

Posted by JamboEveryone at 3:30 PM