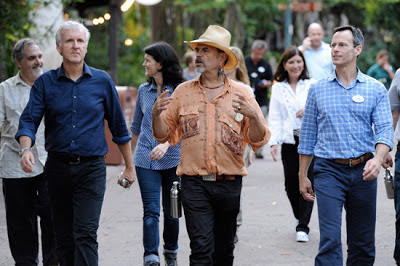 Disney has been very guarded about this disappointing news, offering no reasons for the change, just simply removing his name from press releases and such.  Quite honestly, Mr. Rhode is the most important Disney employee to DAK fans so he will certainly be missed.  Let’s just hope everything is okay...

Celebrate Earth Day and DAK15 with Unique Keepsake and a Party for the Planet:  This morning, the Disney Parks Blog released some more specifics about the Earth Day/Anniversary activities, including the “Party for the Planet”.  The party looks to be a great event for kids and a great learning event for everyone.

Also, if you are lucky enough to be there make sure you pick up a Commemorative Guide Map.  But an even better souvenir will be the special conservation buttons offered for donating to the Disney Worldwide Conservation Fund

Adventurer’s Outpost Meet and Greet to Open May 12: As part of the ongoing shuffling of DAK’s layout to accommodate the assumed Avatar project, Mickey and Minnie will soon have a new meet-and-greet area in Discovery Island called the Adventurer’s Outpot.  LaughingPlace.com has more info.

Posted by JamboEveryone at 11:41 AM