Personally, I love stories about the animals of DAK and if you look around the internet you can often follow the progress of those animals who have left for other zoos around the world.  This week we have two stories to share with you about how DAK’s stars have helped other institutions in their quest to increase the population of threatened and endangered animals.

The first is this story from Nature World News reporting on a new baby gerenuk at the Denver Zoo.  The baby’s name is Blossom and her mother Layla came from Disney's Animal Kingdom. (The photo below is of the gerenuks found at Pangani Forest Exploration Trail) 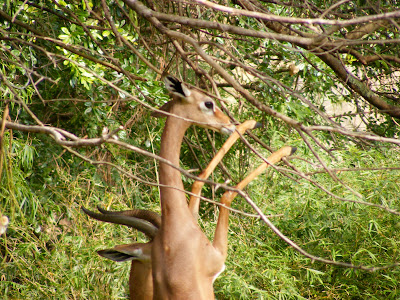 The next is from the Knoxville News Sentinel who update us on the progress of one of DAK’s gorillas.  Her name is Hope.  She is 29 and is now a permanent resident of the Knoxville Zoo.  She was sent their as part of the Association of Zoos and Aquariums’ Species Survival Plan for the endangered western lowland gorillas.  Good Luck Hope!

I don't want to get preachy here, but this kind of work may soon become the only remaining avenue to save endangered species.  As humans continue to cause things like habitat destruction and poaching, survival of some species in the wild might no longer be possible.  Efforts by zoos may soon be all we have left to keep them from extinction.

by Dave McBride
(twitter: @RadioHarambe)
Posted by JamboEveryone at 2:02 PM