The Posters of Harambe; Part One

Harambe is an amazing place. It truly is. The level of detail astounds and its one of the best reasons to go on the Wild by Design tour for a true taste of what is really there and to understand the back story and the level of detail the imagineers placed under your nose. Most people don't know it and perhaps don't care as they hustle their way to Kilimanjaro Safaris or check in at the Tusker House. Someday I will post for you the history of Harambe, the colonial fort turned tourist town on the edge of the wild. 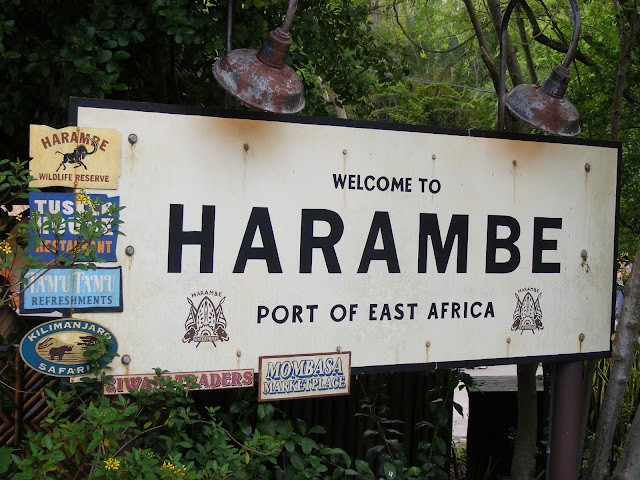 For that is what Harambe is "now". The word means "working together" and what once was a term used for locals and their European lords, now identifies the town's attempt to live with the animals at the neighboring Harambe Wildlife Reserve. The Burudika Hotel, the Mombasa market, the fruit stand all make their money from guests heading out on their 2 week journey into the reserve. The town's economy now relies on living animals, not on hunting them.

To set that stage, Disney imagineers used different techniques. One of the most fun ways are the posters and signs spread throughout the town of Harambe. Disney imagineers traveled to eastern Kenya for inspiration. Kevin Brown, who was the Lead Show Writer for concepts and development for the Animal Kingdom in this design phase spent a lot of time gathering those ideas. Perhaps no one was more important in this process. He was responsible for the all graphics whether it be in Harambe or Gorilla Falls or Discovery Island. And in the Africa section of the park, he used his trips to get a sense of not only the decor but the language and syntax to get an authentic feel to this little east African town. 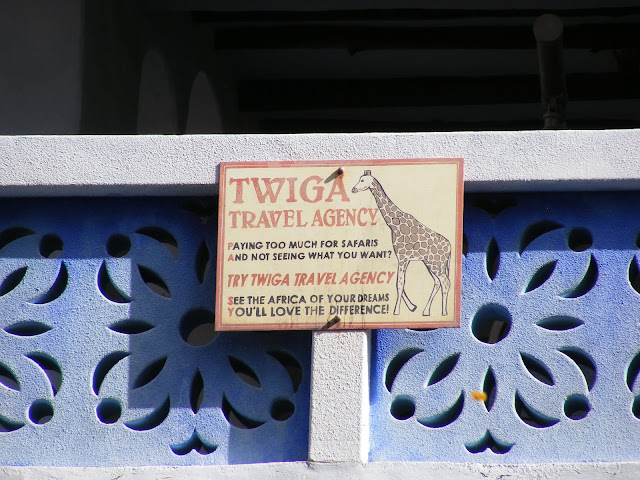 In Harambe, as I said, the posters are used to set a feel. The feel is that of a town in transition. Its old way of life, first controlled and used by European super powers (mostly Portuguese and British) to a haven for big game hunters has now become a stop over before tourists with big wallets and fancy cameras head out to see elephants, rhinos and lions. The posters are ads used to get those tourists to spend some money.

These signs are also used as little pieces of homage to the people that worked on the project not at all unlike the windows at Main Street over in the Magic Kingdom. There are little winks to Joe Rohde, landscape planner John Shields, architect Ahmad Jafari among others.

I want to show you some of the examples that the streets of Harambe has to offer: 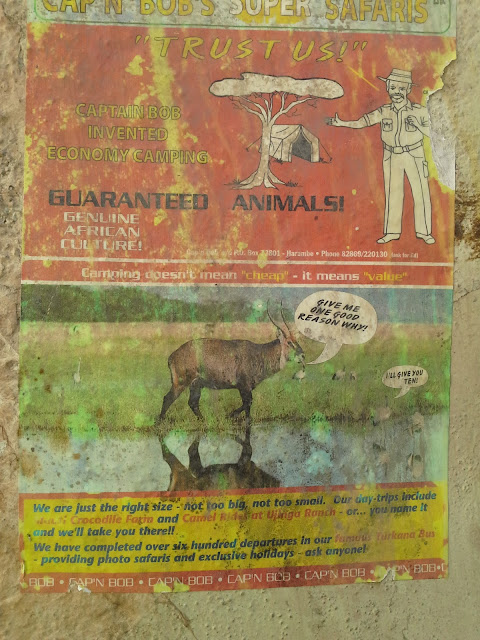 You see the safari you are taking is not the only one. There are the cheap knock offs like Cap'N Bob's Super Safaris. He apparently invented economy camping and is guaranteeing animal sightings. Of course, if you read further your safari includes a crocodile farm and a camel ride so, yeah, you will see animals. 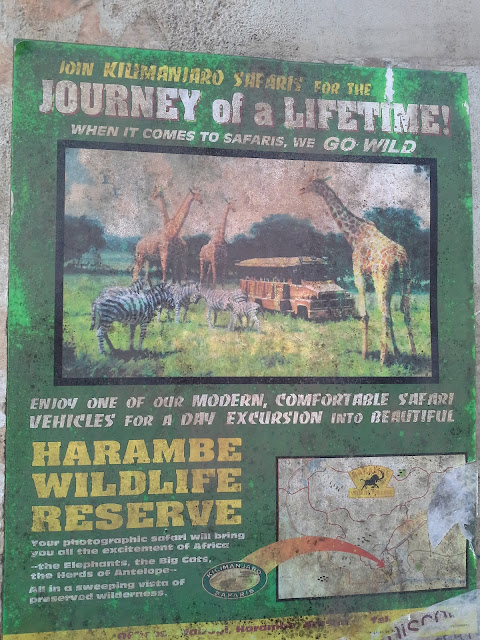 And then there is the safari you will be joining, the Kilimanjaro safari through the Harambe Wildlife Reserve. To me, this poster is a bit more elegant. It emphasizes the fact that we are talking about a photographic safari as opposed to a hunting one. 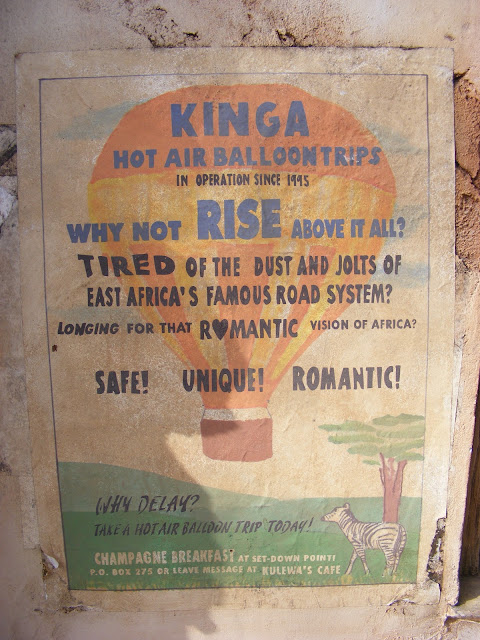 I wish they actually had this safari at the Animal Kingdom. A champagne breakfast flying over the wildlife reserve. Sounds nice right? Just another example of how the local population is using the reserve to boost its economy instead of it serving as a detriment. Its also there to demonstrate how new all of this is. This venture has been in operation since 1995, only three years before the Animal Kingdom actually opened. 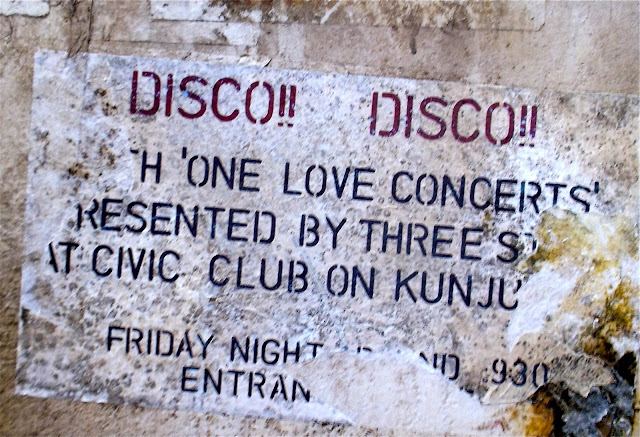 I love this sign. "One Love" at the local Civic Club. I love the fadedness too. I can only assume One Love's performance was some time ago. 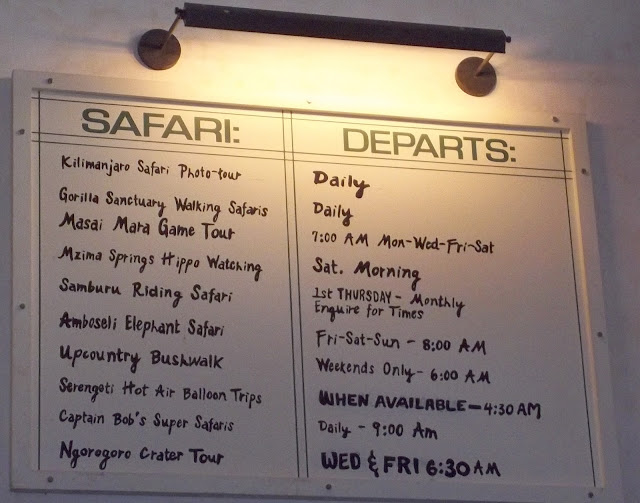 This one is a little different in that its not on the streets but inside the Tusker House. This gives you information on all the different types of safaris you can take. Of course, the first two reference Kilimanjaro Safaris and the Pangani Forest Trail. The rest, well, you can see references to the posters for the balloon tour and good old Cap'n Bob. That's synergy. 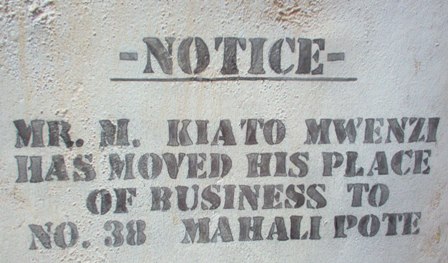 This is another homage. It is referencing an imagineer who left the company during the construction of the park. Mahali Pote translates to everywhere.