After getting the green light for the Animal Kingdom project, Disney imagineers began dreaming up concepts for the park. We have discussed previously some of the early ideas for the park's icon including the awesome three tiered carousel and one of the ideas behind the Tree of Life in its early stages. But perhaps nearly as important as the park's icon is the park's entrance. They say that first impressions last and Disney has always been mindful of that, whether that's the grand entrance of Epcot or hiding Cinderella's Castle from view until you enter Main Street. 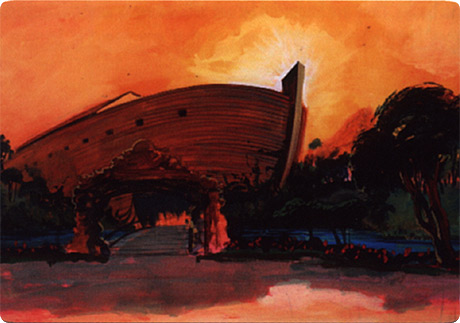 At the Animal Kingdom, there is, of course, the Oasis, a very different kind of opening statement for a theme park. But that wasn't always the plan. One early concept favored by Joe Rohde himself was the idea of Noah's Ark being the entrance to the park. If you think about it, the idea makes a ton of sense. Noah, after all, was earth's first conservationist. And the story of the Ark presents an important message which many know regardless of religious denomination. The moral of that story is that animals are just as important as humans to the survival of this planet, and need to be saved. Zoos all over the world often use the Noah's Ark metaphor in promoting themselves as saving animal life. After all, the zoo is taking animals in from disaster and the destruction of their homes to save them for future generations, which is pretty much Noah's game plan, too. Disney was going to be the first "zoo" that actually had an ark.

The Ark itself would have had a big old walkway through it so all guests would be entering the park through the ark. The plan was to have animal exhibits in the ark too. In theory, these exhibits would have had smaller animals although obviously the specifics of this never materialized.

The ark, however, looks huge in the concept art. And it would had to have been. First of all, it was supposed to keep the rest of the park including the icon out of view of the guests entering the Animal Kingdom much like the Main Street Railroad Station. Also, it would have to allow all of the visitors in the park to pass through which would be hundreds of people at a single time. Finally, it was to have animal exhibits and, of course, with animal exhibits, there would need to be off exhibit, behind the scenes accessibility for the keepers. No easy feat. And I can only imagine the RFID nightmare that would have ensued.

You can probably guess why it was never built. For all of its symbolism, Noah's Ark, in the end, is a religious specific icon. Some would be offended because they don't follow the right religion and, I imagine, others who do would be offended that Disney would be making money off a religiously important figure. Frankly, I am surprised the idea even made to the concept art stage. But there you have it. It would have been impressive, but it never really had any shot at being made.

Posted by JamboEveryone at 10:24 AM