Over the past couple of weeks, the staff here at Jambo Everyone have put forth a few of our ideas for turning our favorite park into a premier nighttime destination.  (Click here to read those articles.)  But even though writing those articles and having such discussions can be a lot of fun, one sad fact hangs over them; we all know most of this will never happen, at least certainly not anytime soon.

For years Cast Members at Disney’s Animal Kingdom have been told to give guests who ask the very reasonable question “why does this park close at 5pm when I paid almost $90 for the day?” the same answer.  Something along the lines of “the animals need to go to sleep”, which is clearly nonsense when one considers that animals sleeping doesn’t seem to be a concern during the busy holiday season when the park is open for three hours after dark.  But let’s not just be cynical here.  There is more to this than just snarky commentary.

There are good reasons and bad for this realization.  The good reason, well maybe only good depending on your perspective, is that in case you haven’t noticed, Disney is already sinking a boatload of money and resources into the Animal Kingdom.  The “AvatarLand” project, from what little we know about it, looks to be a huge one, incorporating not only the building of an entire new section of the park but also designing and constructing a new theater for the Festival of the Lion King.  All of these additions will add to the slate of attractions which can be open during night hours.
But the real fact of the matter is, I can see no monetary reason for Disney to change what they have.  The Animal Kingdom is an incredibly complicated and difficult park to maintain, yet it makes money and guests enjoy it.  (Despite what some podcasters would have you believe.)  Why change it to a more labor intensive and costly park? 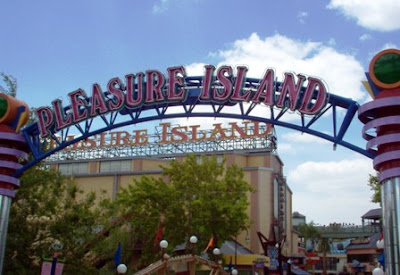 Also, recently Disney announced an enormous expansion of Downtown Disney.  Do we really think Disney is going to create more internal competition for DTD?  During the times of year with medium to lower crowds, Disney closes both DAK and Hollywood Studios relatively early.  It saves on operating costs, but it also encourages Resort guests to migrate towards Downtown Disney or World Showcase where they can spend lots of cash on food and drinks late into the night.  Spreading those crowds out into four parks and Downtown Disney doesn’t make any sense from a numbers point of view.  And let’s face, no other point of view matters more.

The only thing we named in our series of ideas I would expect to actually see some time soon is some kind of night time parade or show.  During the busy months, Disney needs DHS and DAK to relieve the night hours crowd pressure on Epcot and the Magic Kingdom.  And with major construction projects coming to DTD, that pressure will get greater and greater.  But you can bet any such parade or show will eventually not be on a nightly schedule during slower times of the year.

So with all of that in mind, even after Avatar opens and the unnamed parade begins, I really don’t expect the operating hours at DAK to change very drastically, nor do expect anything else added for years to come.  An addition of a couple of hours to the current schedule is about all I think Disney will ever want.  So into the trash can go our ideas...

by Dave McBride (twitter: @RadioHarambe)
Posted by JamboEveryone at 10:27 AM