A Review of the Imagineering Field Guide to Disney's Animal Kingdom

The book is one in a series which also includes The Magic Kingdom, Epcot, Hollywood Studios, Disneyland and, coming soon, California Adventure. All of these books share the same basic premise. In fact, each book shares the same first few pages titled "Imagineering 101" which covers the basics including terminology, history and disciplines. The book then turns to the park its covering and goes land by land giving you the background of each land. 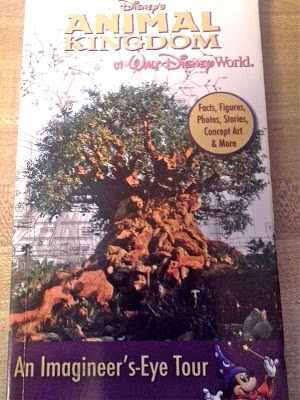 This works best in places like the Animal Kingdom where theming and back story are so important and often not known by the average visitor or even staunch Disney fans. The book starts off with details on the formation of the park itself with some great concept art on things that never happened like the three tiered carousel. The author then hits each land from the Oasis to Dinoland, USA. You want to learn what it takes to landscape an area that gets eaten by its inhabitants? This book addresses that. Did you want to discover the back story of the Pangani Forest Trail? No problem, its right here.

This book provided history lessons, back stories, and nods to the little touches like the great posters of Harambe. I can't recommend this book enough. Anyone interested in imagineering (and frankly, I would think anyone reading this blog is) should pick this book up. In fact, pick up the whole series. You will definitely get a new appreciation at how subtle the imagineers actually get. Its also a lot of fun to see a little sign and no exactly what that means.

Posted by JamboEveryone at 9:57 AM