Today's Wildlife Wednesdays post on the Disney Parks Blog is an exceptional one, offering some really nice info on these little guys.  But if you really want to learn about them, watch for a new Safari Mike article tomorrow.

Don’t Panic Disney Fans, the Turkey Legs Haven’t Disappeared:  This week we are seeing some changes to the snack cart and counter service options at Disney’s Animal Kingdom.  Included in those changes is the movement of the famed Turkey Legs from the Trilo-Bites cart in Dinoland to the Flame Tree Barbecue.  (I won’t bother pointing out that the Legs are, in fact, not barbecued.)  Trilo-Bites now offers some insanely good looking desserts, including a Baked Apple Blossom with Ice Cream...YES PLEASE! 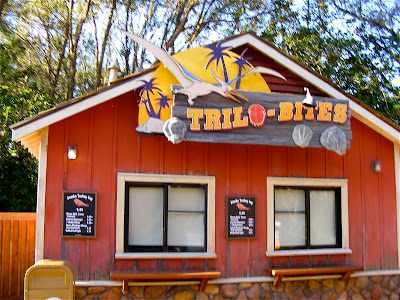 Garden Kiosk Debuts:  As we reported earlier in the week, the new food allergy information and healthy snack kiosk, called the Garden Kiosk, opened at Disney’s Animal Kingdom.  It may be a only a snack cart, but it’s been a long time since I have seen such small addition to a theme park receive such universal praise.  Let’s hope the execution is as good as the concept.

Have A Wild Time this week!!
Posted by JamboEveryone at 9:46 AM