Previously, we had discussed some ideas for the entrance to the Animal Kingdom. One of the most interesting was a take on the age of dinosaurs. There was no question when this park was in its early concept stages, Dinos were big. Jurassic Park (released in 1993) was all kinds of huge. And Disney was working on its own dino-project, the relatively poorly received Dinosaur animated feature. But in the mid 1990s, Disney wanted to capitalize on the Dinosaur mania. 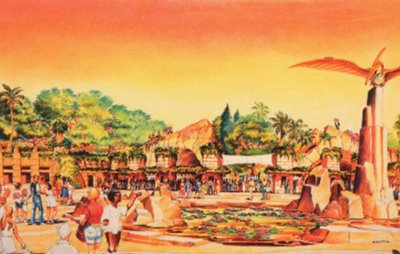 So its no wonder that a dinosaur themed entrance would be among the ideas in the running as the park was being put together. There is only one piece of concept art floating around out there. But what it depicts is certainly interesting. Essentially, it looks like the desert. But instead of being a roadside attraction like Chester and Hester's Dino-Rama, this appears more to take place in the ancient past. A pterosaur sits up high looking down on guests as they pass by. It wouldn't surprise me if that beast would have been an audio-animatronic (by the way, pterosaurs were not dinosaurs). He sits on top of a rock that overlooks some sort of colorful water. The gates themselves look like rock work.

Its not hard to imagine why they chose not to focus on dinosaurs at the entrance. Dinoland USA is not, as I said, set in the Triassic period or some other long ago time so why have the entrance set there. But perhaps more importantly, it is likely imagineers would not want extinct critters as they first thing seen by the guest. Disney was building a park about man and nature. A theme from 60 million years ago does not really establish that. So, imagineers moved away from this concept. But its fun to look at.

Posted by JamboEveryone at 7:33 PM