As of yesterday, Disney’s Animal Kingdom will no longer have any rope-drop ceremony inside the park, instead allowing guests into the park 15 minutes early.  According to wdwmagic.com, guests will be allowed early access to Kilimanjaro Safaris, Expedition Everest, and TriceraTop Spin as well as some snack carts. 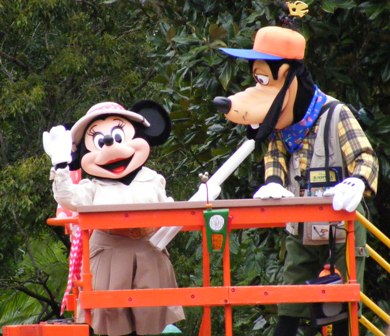 I received a heads-up on this a couple of days ago, but I was not certain about what if anything would change with regards to the actual opening operations.  Was this just a cost cutting measure to remove the rope-drop stuff?  Maybe, but I am not at all disappointed with this move.  In fact, I like it a lot.

Disney’s Animal Kingdom is supposed to be different from the rest of the Disney theme parks, and here is yet another way it is.  What I truly dislike about the rope-drop stuff is how it encourages folks to push, shove and run their way to an attraction.  DAK is NOT a commando-style park.  Slow down, relax, and use FastPasses to your advantage if it’s crowded.  Put away your battle-plan mindset and save it for the other parks.  There is always plenty to see and enjoy at the Animal Kingdom.

On top of that, this adds to the overall park hours and it increases the number of available morning Safari rides, the most impressive and coveted of safaris.  Any increase in that availability is a big positive for DAK fans.

Posted by JamboEveryone at 1:28 PM