The Animal Kingdom Lodge has many attributes that set it apart from the other resorts at Walt Disney World. We have discussed the tours, the animals and the food. But one of the most under appreciated aspects of the hotel is the art. There is lots of it, especially at Kidani Viilage. The resorts have nearly 400 pieces of authentic African art displayed throughout the lobbies and halls. It has been cited as having the largest such collection outside of the African continent. We want to start spending a little time on this fantastic aspect of the resort. 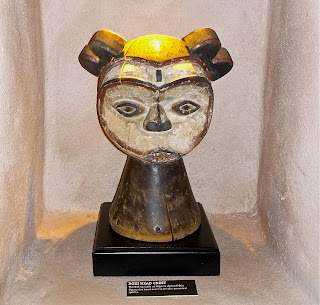 The Boki people of Nigeria who created this head crest live in one of the more inhospitable places in the country. The area is covered by the Cross River rain forest, one of the few left in the nation and most of it cannot be reached by car. They live amongst gorillas, chimpanzees and the incredibly rare drill of the jungles of the Afi Mountains. Much of their culture and art is shared by the Ekoi peoples.

The Boki are known to be expressionist in thier art, and indeed this piece found at Kidani Village is showing emotion, albeit not a very happy one. These headpieces were worn by the tribes people during events such as initiations and funerals. They often used human faces in their designs as opposed to mythical or animal motifs. As a head crest, this was worn on top of the head during the their dances.

Posted by JamboEveryone at 9:47 AM