As we have said before, Kidani Village at the Animal Kingdom Lodge is chuck full of authentic African artifacts. Its like living in a museum as well as a zoo. One of the most striking pieces is the Bamileke Leopard Headdress.

The Bamileke inhabit the western jungles of Cameroon.  They speak a language related to Bantu, and are generally thought to be related to that tribe. It is an area rich in bamboo, and that dominates the architecture of the area. It is estimated that there are over 3.5 million Bamileke. 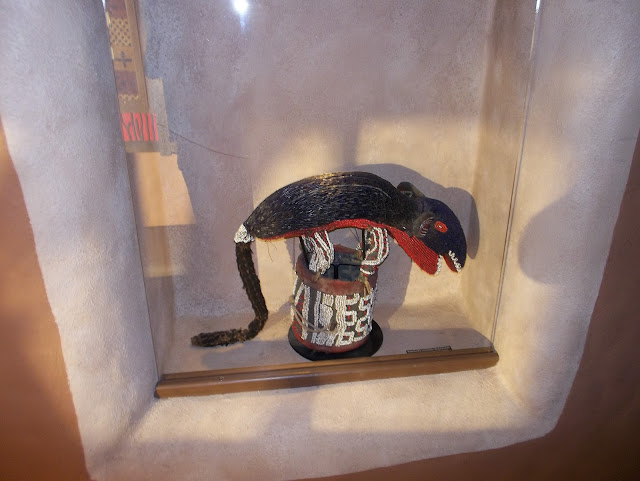 The people are divided into numerous fondoms, which ruled by a single male chief or fon. One such fon wore this headdress during ceremonies. Traditionally, it was believed the fon could turn into an animal like a leopard or buffalo. Most art pieces like this headdress, were created for royal ceremonies. It was this art that signified the power of the chief. The more he had the more important he was. A chief would often have many of these headdresses as well as bracelets, swords, masks and the like. Beadwork is common.

Settlements are essentially groups of extended families which are dominated by a head male. The fon, or chief, is both the political and spiritual leader of these settlements. He is also the judge and general of the tribe. His successor is always a son. All families trace their ancestry through the father. Ancestor worship is the main religion amongst the groups. Ancestral skulls are important totems.

Posted by JamboEveryone at 9:42 AM