This is one of the coolest pieces of African art at Kidani Village. It is the Senufo staff finial. According to the plaque, it was used as an award for the most diligent young male farmer. They were set on posts around the farm as a symbol of pride.

The Senufo tribe is located in western Africa with the largest single population in the Ivory Coast. However, they are found in Ghana and Mali, as well. The capital of the tribe is Korhogo, a 13th century town in the northern part of the Ivory Coast. As this piece shows, they are primarily a farming people. The main crops include peanuts, rices and yams. 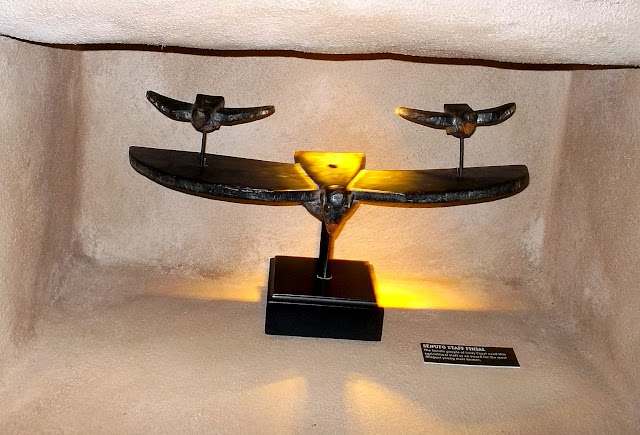 Birds are very common in the staff finials. They symbolize prosperity. Pythons are another common symbol in Senufo art. Religion involves numerous rituals and the use of brass jewelry which often incorporates the python. Figures that represent ancestors are also common.

Society is divide into different castes. These divisions, called katioula, separate the people into farmers, blacksmiths, carvers, brass casters and leather workers. There are also four societies which govern the people. One is the Poro which ensures good relations between the living and the ancestor spirits. Another, the Wambele, are sorcerers. Divination is the realm of the Sandogo, who are mostly women.

Posted by JamboEveryone at 9:30 AM