The Chokwe, sometimes spelled Chockwe, tribe is located in central Africa, particularly modern day Angola and Zambia. They were once one of the tribes of a great empire in the area called the Lunda Empire. At one point, in the 18th century, they separated from the empire, due to what they considered to be unfair treatment. The Chokwe were becoming wealthy from the ivory trade than ran through their territory to the coast. The emperor demanded tribute. War shortly followed and the Chokwe, obtaining firearms from European allies, overthrew the Lundu emperor. 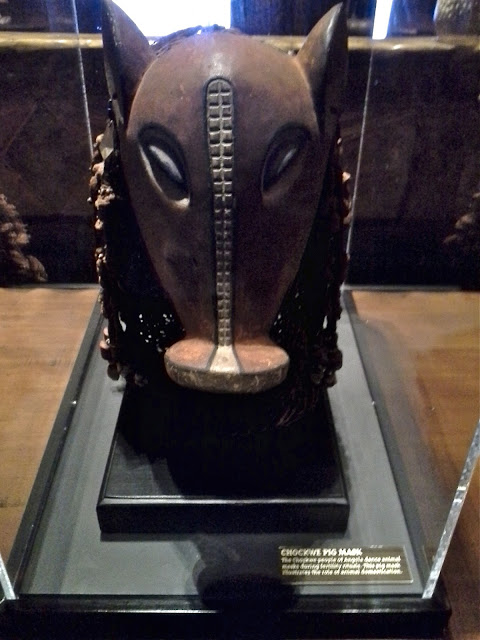 The tribe recognizes a single deity called Kalunga. They also worship numerous nature and ancestor spirits called the mahamba. The spirits belong to the families and communities. As such, they must be appeased or there will be misfortune. Evil spirits are activated by sorcerers called wanga and health is administered by the nganga. They practice divination, the most common of which involves tossing items into a basket and "reading" how they fall. Chiefs are referred to as mwana nganga.

Masks, like this one, are commonly carved among this tribe. They are not decorative but are believed to hold power. They are often in the forms ancestor spirits, mythological figures, or, as in this case, animals. They are used in various ceremonies such as to heal and to promote fertility.

Posted by JamboEveryone at 4:03 PM