Each building at Discovery Island is themed and Flame Tree Barbecue is certainly no exception. In fact, it probably goes farther than any other building in the area. Here, its the predator/prey relationship that forms the underlying theme. Like much of Discovery Island the design is Balinese in nature although there are influences from Spain, Iran and the American Southwest. 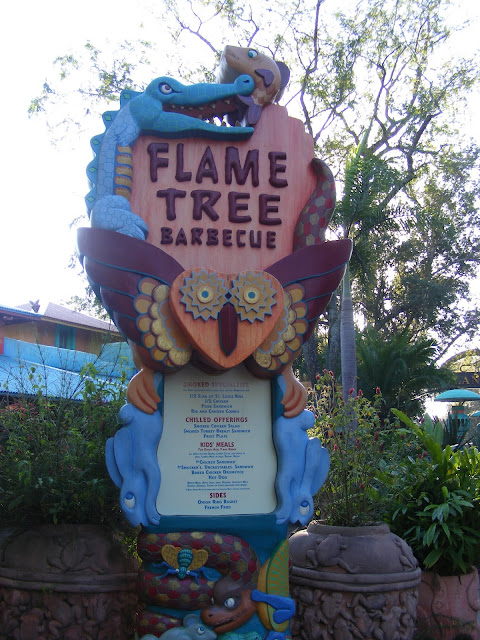 At the front of the building there are several whimsical carvings that set the theme up. A bat hovers over a butterfly. Frogs sit on snake heads. The front sign features an owl clutching a pair of rabbits and a crocodile about to snag a fish. All very colorful. And the designs are such as not to be gory or too much like a "nature documentary." I like the rafters with ends of rhino heads. These rhinos are covered with birds who eat the insect that pester the rhino, an unusual example of predator and prey. 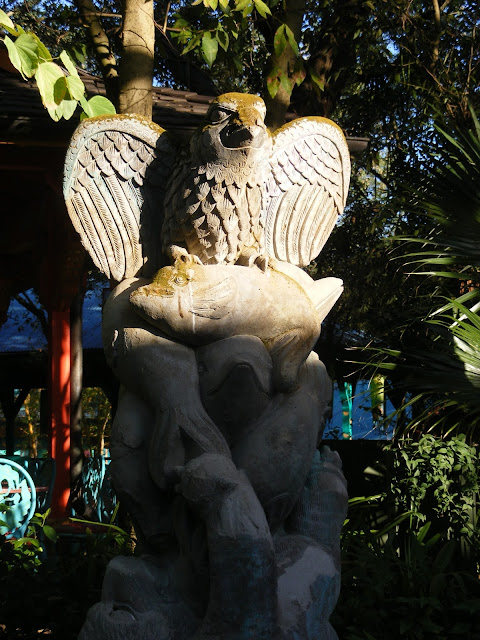 But that's the front building where you order. The real highlight of this place is the back where thee are numerous pagodas set up for dining. Each one is themed after a particular predator/prey combo. One features spiders and butterflies, while another is themed to an anteater gobbling up ants. Owls hunts rabbits at another spot. One pagoda is themed to eels preying on crabs. One area features eagles catching snakes and a nearby building has snakes, in a turnabout is fair play moment, eating mice. The farthest of the buildings features crocodiles eating fish. This last one is down by the river and offers great views of Everest and the Forbidden Mountain in the background. 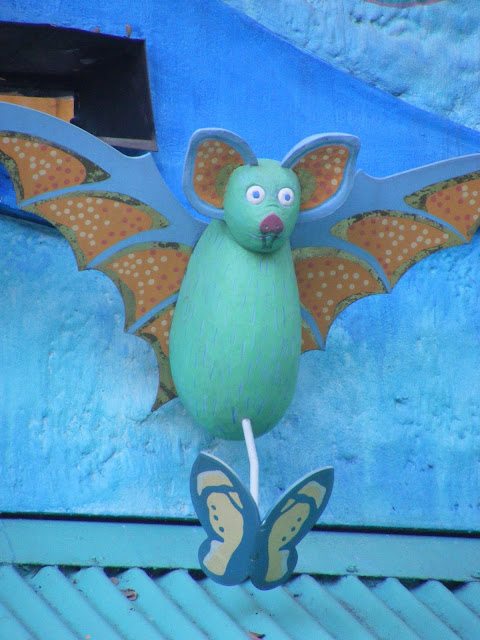 These themes are carried out all throughout each individual pagoda. Paintings adorn the ceilings, like one where ants are scurrying back into their mounds to avoid the anteater. The posts are sculpted to look like the animals whether that be an eel, eagles, or a snake with a mouse in its mouth. Windsocks adorn each spot and again are painted to match the animals whether that's an owl pulling a rabbit out of its hole or crocodile biting down on a fish midstream. Lamps keep the theme going too, like an anteater plunging its tongue into an anthill. My favorite little piece of theming? The tables and chairs. The tables, where you put your food, are decorated with the prey, while the chairs show the predators. 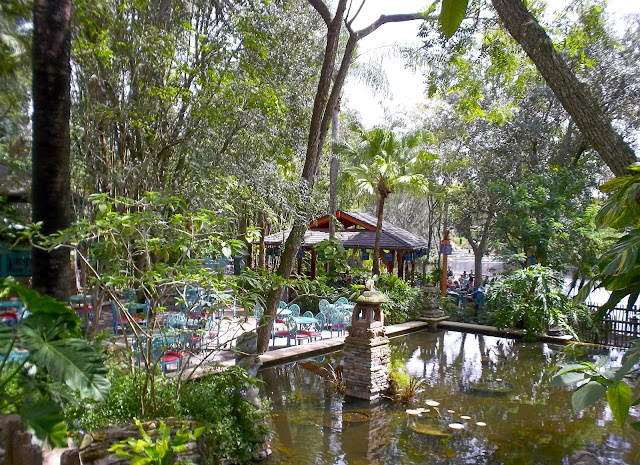 The pagodas cover a huge area. Each has plenty of seating and its own condiments bar. One borders a beautiful pond covered with fun stone statues. The crocodile pagoda sits far away for the bustling crowds of Discovery Island on the water. It offers fantastic views of Everest with the screaming only faintly heard.