The Baule people are a large tribe located in present day Ivory Coast. Currently, there are approximately a million ethnic Baules in that nation. The tribe name actually means the "child has died" and is a reference to a legendary queen, Abla Poku, who sacrificed her own son in an effort to save her people. The society is admirable for its tolerance and individualism. Each village is run by a counsel of elders but decisions are made after long discussions where every one who lives there can be participate. Even slaves took part in the decision making process. 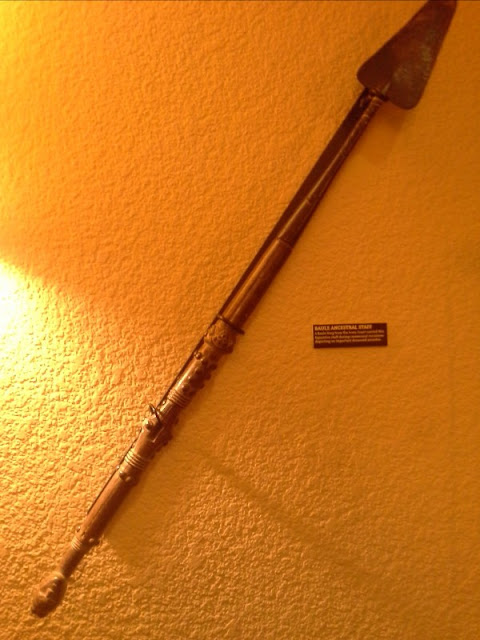 Like much of the area, ancestors are worshiped. As an agricultural tribe, the yam was a staple crop and was often a thing of sacrifice to the ancestors. The tribe is also well known for its wooden sculptures including masks, figurines and staves, like this one. The wood worker was a profession of choice and one of great esteem. It is believed that the wood itself allowed for a closer connection to the spirit world. This staff was used by a king during rituals dedicated to ancestors. These ancestors were worshiped but never depicted in art.

by Safari Mike
Posted by JamboEveryone at 12:28 PM