It seems the folks who run the Disney Parks Blog decided today would be a good day to upload tons of concept art from Imagineers.  And we have a couple of items to discuss this morning concerning Disney's Animal Kingdom.  So let us begin with the artwork associated with the newly announced Harambe Nights premium hard-ticket event, with a look inside the new show called  “The Lion King – Concert in the Wild.”

The one thing that stands out in my mind when I look at this is the layout of the show itself.  The Festival of the Lion King show is "in-the-round", but this performances apparently is not.  So that means the capacity of this particular show is much less than that of the theater itself.  The capacity of the theater is, I believe, just short of 1500 people which means Harambe Nights may only be available to a few hundred on any given night.

Disney also released a rendering of the "street party" portion of the event... 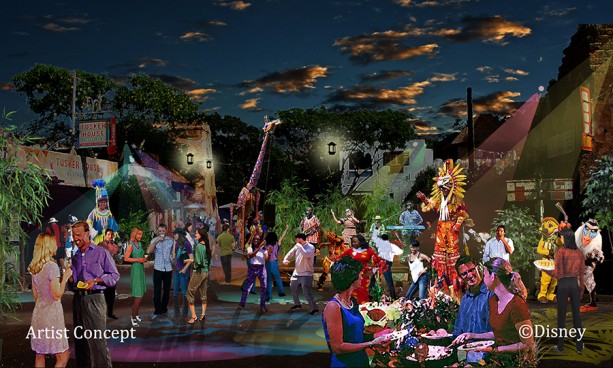 Now, looking at this is kind of a game of "eye-spy", don't you think?  What can you see here?  I see character meet-and-greets by Rafiki and Timon, cast members from the Festival of the Lion King dancing and mingling, Burudika Band performing, a really interesting look lighting design for the entire space, and a wait-staff walking around serving hors d'oeuvres .  Anything else you can take from this?

Safari Mike also pointed out to me the interesting wording around the buffet which is described as an "all-inclusive buffet of sophisticated and flavorful African cuisine and gourmet desserts".   Yesterday, I said that "unless they have a different definition of "all-inclusive" from the rest of the world" then drinks would be included in the price.  Well, it appears Disney may indeed have their very own definition of the phrase, as drinks are conveniently not mentioned.  But we don't know that for sure yet, so stay tuned...

Email ThisBlogThis!Share to TwitterShare to FacebookShare to Pinterest
Labels: DAK at night, Festival of the Lion King, harambe nights