So, I have good news and bad news regarding the River of Light show being developed for Disney's Animal Kingdom.  First the good news, we have concept art and it looks stunning! 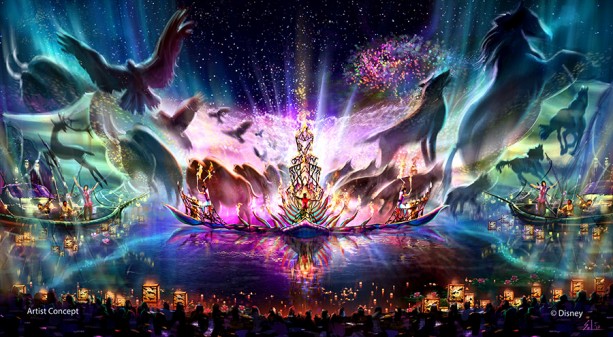 There is nothing about this I can complain about, and that's saying a lot coming from this curmudgeon.  This should really get every DAK fan excited for the potential in this show.  Much to the relief of Safari Mike, Avatar seems to have no involvement in Rivers of Light.  Instead we have a show whose focus is on animals and the natural world.  We couldn't ask for more at this point.

And now for the bad news, we can assume this show is not happening any time soon.  The article gives no indication of a timeframe for Rivers of Light, but instead says we should look for it in "the years ahead".

The posting also tells us the Rivers of Light will take place on the "broad, natural stage of the Discovery River, between Discovery Island and Expedition Everest".  Which means they will not be using the new waterfront being constructed over in Harambe.

So what do you think of this rendering?  Do you like it as much as I do?

Email ThisBlogThis!Share to TwitterShare to FacebookShare to Pinterest
Labels: rivers of light