“It All Started With A Mouse” and a Love of Wildlife: On today's Disney Parks Blog we learn about a new show over at Rafiki's Plaet Watch called “It All Started With A Mouse”.  The show will include Conservation Station’s “animal ambassadors, such as sheep, parrots, porcupines, birds of prey and Kunekune pigs.  The stories will include some natural history, lots of information about the animals and a strong conservation message.  And after the show, folks will get a chance to meet some of the animals up-close and get some photos as well. 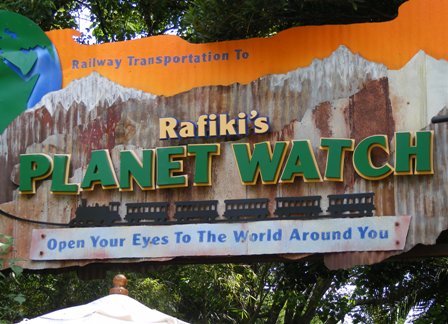 It is really important to note here that this show is only happening once per day, at 11:30am.  So make your plans around this time if you want to see it.  It looks like a nice addition for the kids and for Rafiki's Planet Watch.

New Coffee Kiosk Coming to Discovery Island:  The changes and tweaks at the Animal Kingdom just keep on coming.  Now, it looks like construction has begun on a new coffee kiosk on Discovery Island near the bridge to Dinoland USA.  Walls are already up in the area and wdwmagic.com is speculating that this may be a Joffrey’s outlet and not Starbucks.  We will let you know if we leaner anything else.

Posted by JamboEveryone at 4:05 PM