More tidbits on the DAK expansion

Recently, Avatarland and the rest of the Disney Animal Kingdomexpansion got a bit of play in the national media. The LA Times wrote a piece on what to expect from the upcoming additions. The vast majority of the article is news we have known for sometime but there were a few additional nuggets.

From the beginning there has been a fear that the boat ride experience would get cut from the project leaving one ride for the land. And let's be honest, many times in recent years Disney has built a land with just one major ride. Well, this article does seem to confirm that boat ride is being built. It is referenced as a D-ticket similar to Pirates of the Caribbean. The E-ticket, which we have been calling Soarin' Over Pandora, was dubbed as being more thrilling than the Epcot original. Joe Rohde was quoted as saying same. 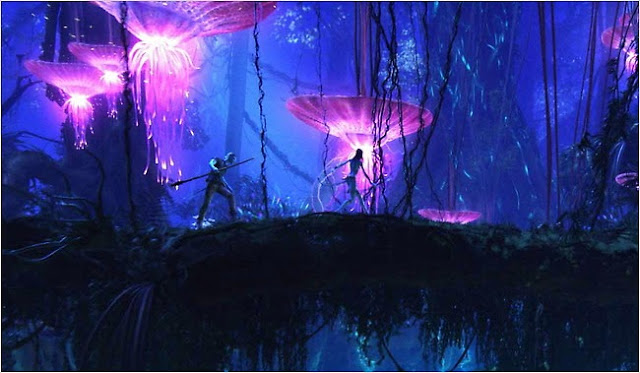 But there were some other details that are just as fascinating our purposes. Rivers of Light was referenced, as well. The author noted that the production was being developed along with Cirque de Soleil and the company behind the famed fountains of the Bellagio resort in Vegas. And interesting team up for sure. It also specifically says the production is similar to the World of Color - which makes sense from what we have gathered so far.

And finally, most intriguing to me, is more on the Avatar section of the park. The article states that the land will be a mix of dense jungle foliage (no kidding), floating mountains (still wanna see them pull that off) and the ruins of a military base. Wait...What? They also go on to say that one area will be themed as the Pandora Area Landing station that could be home to a quick service restaurant, and I would add, gift shop.

We have said from the beginning that one issue for the land is architecture - since there is none of it on Pandora. Without buildings, where would people eat, or shop, or go to the bathroom. Well, apparently there will be a landing station and an ruined army base which would, of course, answer that question. I am not sure how I feel about the army aspect being put into the park but they need to sell plush and burgers somewhere I suppose.