You want back story, well its all in a bulletin board

There is a lot of back story in Dinoland USA. In fact, I would be hard pressed to identify another land in any Disney park with nearly as much detail in the back story. And, obviously, the vast majority of Disney park guests have no idea it exists.

Disney, however, wants to help guests discovery those details. And right across from the Boneyard, there is a bulletin board with all sorts of fun posts. Lets look. 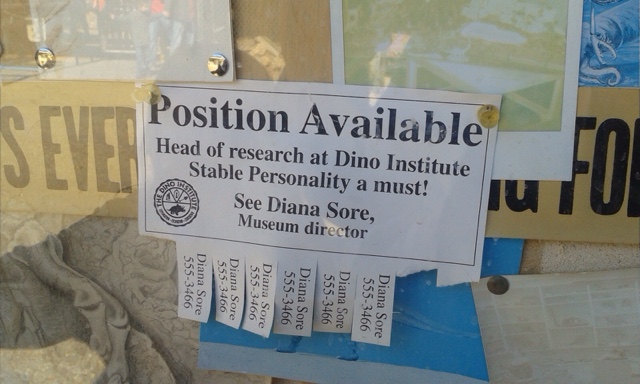 Yes, that is some pun, "Diana Sore." The museum director needs some help and is taking applicants. The museum, as an FYI, is the queue of the Dinosaur attraction, so if you want to be the head of research, have at it. By the way, 3466 spells out Dino on your phone. 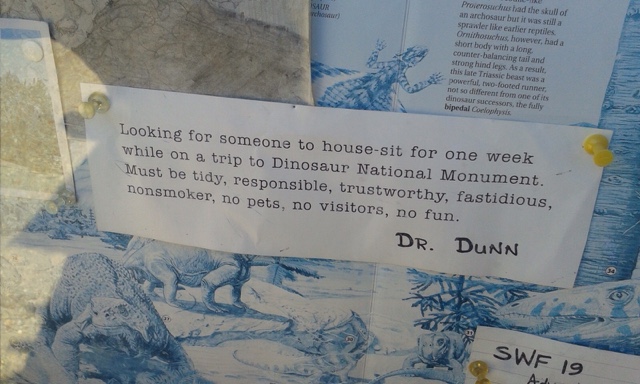 Dr. Dunn is in charge of the interns, for more on them, check out our articles about Restaurantosaurus. Well, apparently, he is looking to take some interns to the Dinosaur National Monument in Colorado. As you can see Dr. Dunn is not exactly a fun loving sort. Take a look over at the restaurant and you will see a welcome letter from this same doctor as well as notes demanding interns stop swinging from the chandeliers. 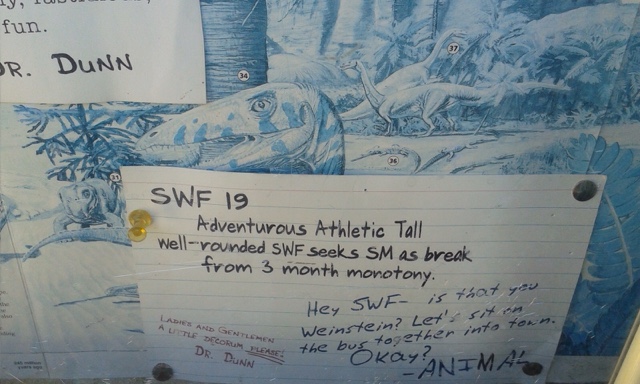 This is a fantastic little note and one that shows the interns really don't heed Dr. Dunn, at all. Weinstein, an intern is looking for love and another intern nicknamed "Animal" (who is also referenced at Restaurantosaurus) is receptive. Of course, Dr. Dunn is none too pleased. 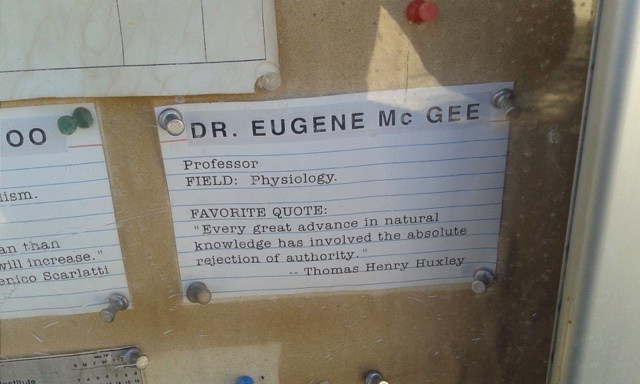 Some of the staff have posted very professional looking cards with their fields of expertise and their favorite quotes. 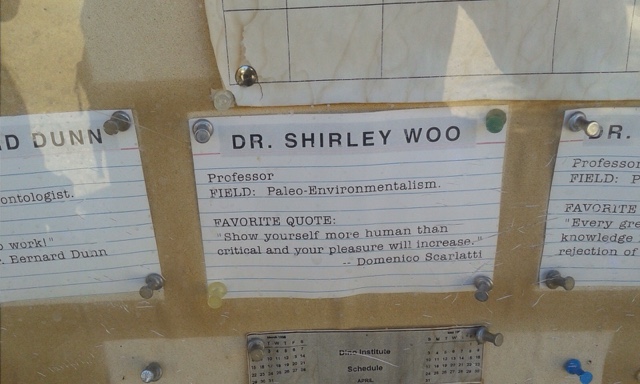 Both Drs. McGee and Woo make other "appearances" on this board. Dr. Woo also has a post up in the boneyard itself. There she instructs the interns about the importance of hip bones in classifying dinosaurs. 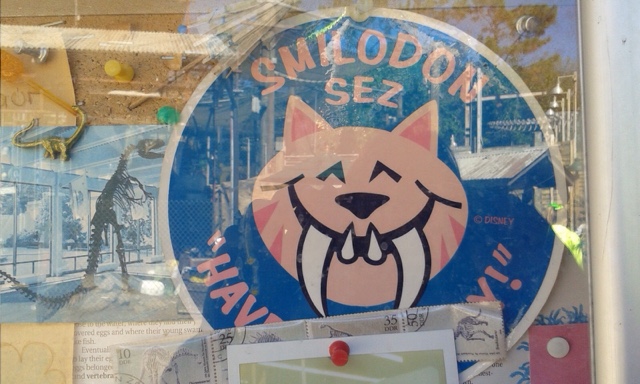 The interns love fun, and what could possibly be more than a smiling smilodon. The interns also post cut out pictures of how we used to think dinos stood (until that is, we discovered how important hip bones were) as well as dino knick knacks and stamps. 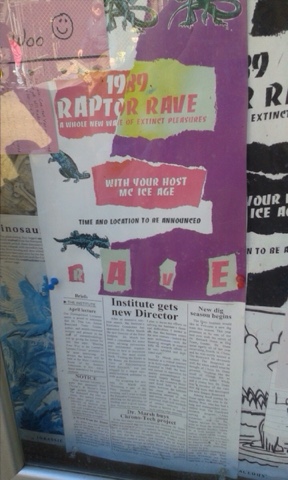 You want back story? Well, here is a big dose of it, This article talks about the new director of the Dino Institute, Dr. Helen Marsh. What's more is that details are provided on Dr. Marsh's new partnership with Chrono-Tech, a small company in nearby Arizona. Chrono-Tech specializes in "temporal peregrination and artifact recovery." I think we can all guess what that means, any more information would obviously be proprietary. 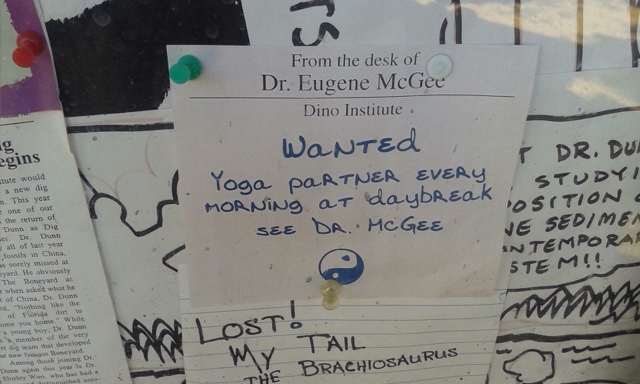 More fun here as Dr. McGee is looking for a yoga partner. Again, the interns have a little fun about a brachiosaurus. 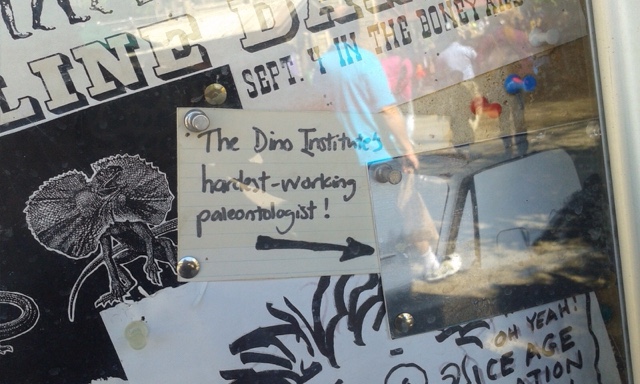 Apparently there will be line dancing in the Boneyard in September. 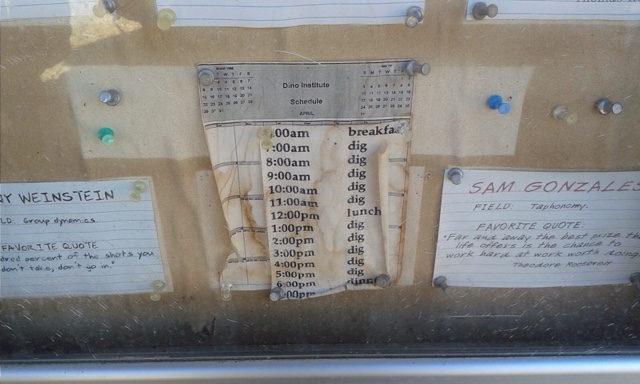 The schedule does seem somewhat monotonous. 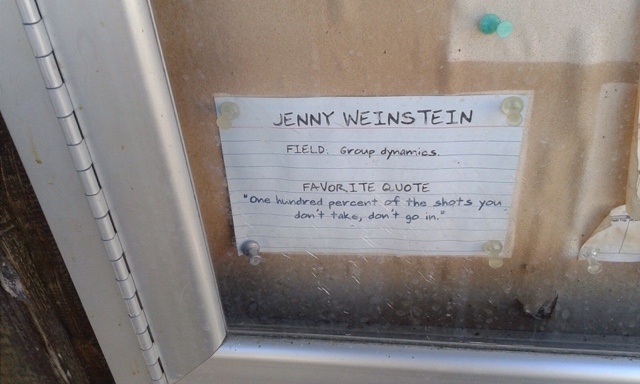 Remember Jenny? Apparently she is a specialist in group dynamics. And, who better to know a little about working in a group than Wayne Gretzsky? That is who this quote is from. 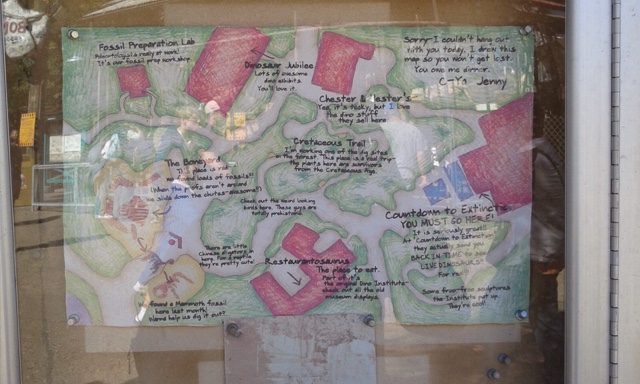 Jenny is also responsible for this hand drawn map. It shows Dinoland USA on the day it opened. She drew the map for guests because she can't show us around. On the map, Dinosaur is still called Countdown to Extinction. The chinese alligators have long since been replaced by an american crocodile. And finally there is the Fossil Preparation Lab and Dinosaur Jubilee which once stood where DinoRama sits today. At the lab, guests were able to see actual paleontologists working on Sue, the most complete T-Rex skeleton ever found, the original is now in the Field Museum in Chicago and a replica stands on the path leading to the Institute. Dinosaur Jubilee was a tent full of prehistoric skeletons (mostly but not exclusively dinosaurs).  Frankly, I miss both.