What we learned about Pandora

As you are all aware, there was a big Destination D event at Walt Disney World this weekend, and a lot of news came from this event. Most of the big stuff was about the future of Disney's Animal Kingdom, and mostly Avatar stuff. As you know, there were 2 different Animal Kingdom related talks. The first included James Cameron and gave quite a bit more detail about the upcoming land.


The second talk was by just Joe Rohde and discussed the evolution of the park itself. For example, guests learned that Harambe means "lets all work together" and was the name of a boat used by imagineers during research trips in Africa. But lets take a look at we learned about the upcoming project, Pandora - World of Avatar.

1. We learned a little bit more about when the land will actually open. They have announced the opening as "Summer 2017" which is a bit earlier than I expected. We also got confirmation that, at least so far, the entire land will open at once including both attractions.

2. The timing of the land will be about a hundred years after the events of the movie. In fact, some of the concept art shows abandoned and rusting items left behind during the war. As seen in the bridge above, the old days of the RDA, which brought the war to Pandora, have started to be overtaken again by nature, much like the Maharajah Jungle Trek.

3. The floating mountains will be covered in vines, Na'vi totems, and bioluminescent life forms. The entire land will be called Mo'ara Valley. The mountains float thanks to a substance called unobtanium. You will be able to walk around the rain forest of the valley that surrounds the mountains. The bioluminescent life forms spring to life after sunset. This will be true throughout the land. 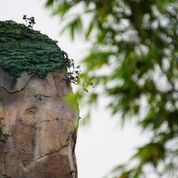 4. The Flight of Passage attraction combines the Avatar program with banshees, meaning, I guess, guests become part of the program. To avoid dangers, you will be assisted by a Na'vi.  You will straddle a banshee and use glasses to enjoy the 3D experience. It will be thrilling and you will not only enjoy vistas of the jungle but also fly through waterfalls and over the ocean. The queue will feature interactive fungus that lights up. 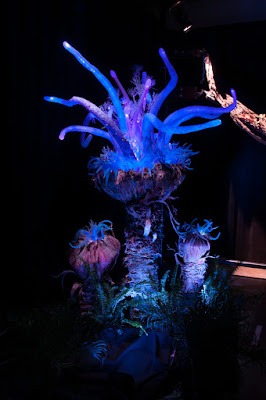 5. Conservation will be a big key to the back story. To that end, there will scientists working to conserve the natural resources of the land. There was also discussion at the event about some of the animals native to the planet.

6. The will be a store called Wind Traders, which is named after one particular tribe that travel the planet trading with others. The Na'vi do not use metals but instead weave, and much of the artwork hang from walls and trees. You will be able to buy not only art work but supplies from ACE. Also, there will be plenty of plush if the concept art below is any indication.

7. Food will be served at the Satu'li Canteen which will adopt the three foot long food items eaten by the natives to guests. Other than saying this food will be "alien" I have no idea what this might mean. The aesthetic though looks fun.  There will be a lot of interesting Na'vi artwork at the place.


8. There will be no walk around Na'vi. They will only be found in the 2 attractions.

9. Pongu Pongu will be the bar. Specialty drinks will be served and the bar itself is made from pieces of junk left from the century old war.

10. The Na'vi River Journey will feature the Shaman of Songs an amazing AA figure that blows all prior AAs out of the water. She is connected to the consciousness of the forest known as Ewya. This ride will take you through a rarely visited area of the Na'vi's home. A video of the figure was shown which is linked here. 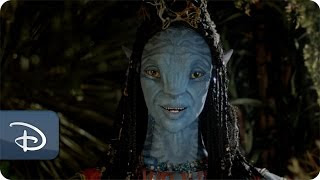 And, finally, one disappointing thing was the lack of Rivers of Light information. It was not mentioned. Not one single time. And, obviously, the rumors of a presentation of it given to all the attendees proved to be incorrect.

I, for one, am starting to believe Rivers of Light is not in our immediate future after all. Its quite possible Disney has decided to hold off on the show until we get closer to opening on Pandora next summer. We might be looking at an Earth Day or Memorial Day 2017 opening.