Change in Hours Again: Hours at the park have been somewhat flexible the last few weeks. In September, the crowds get lighter so park hours shifted down to 8:30 pm. Now, as we close in on Columbus Day weekend, the park hours are moving back up. However, instead of a set time, it seems closing with vary between 9 and 9:30 pm. So keep an eye on that if you are down there this month. 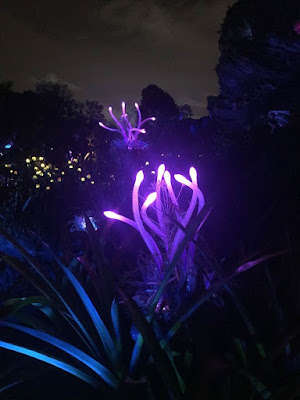 Hooded Pittas: The Hooded Pitta is a songbird found in Southeast Asia, or in Disney's case, Anandapur. Apparently, the breeding pair at the park are having a difficult time raising chicks on their own. So Disney cast members at the Aviary Research Center have pulled the last set of eggs and are hand rearing the chicks. They have to be fed every 2 hours - including in the middle of the night, and hopefully, there will be some new birds added to the exhibit as a result.

More Babies: Speaking of animal births, the sitatungas over at the Animal Kingdom Lodge recently added to their numbers. Over at the Disney's Animals, Science and Environment facebook page, you can see the adorable little antelope. The sitatunga is a swamp dwelling animal found throughout Central Africa. Although the animal is listed as of "Least Concern," habitat loss is a problem in the area, and its population is shrinking. In fact, it is now extinct in historic portions of its range.

Tiger Babies: Yes, even more baby news. We reported quite some time ago that the Sumatran tigers had cubs. We now know there is a male and female cub. Apparently, they are doing well. They have started walking, and their eyes have opened. No word on names yet. Also, Disney continues to say the cubs will be off exhibit for "the next few months" meaning they will likely not be out until after the new year.