Disney's Animal Kingdom News for November 22, 2017: The end is near for Flights of Wonder

Pumpkins Everywhere: The Disney parks blog has a post all about the use of pumpkins for enrichment. Basically, enrichment is anything keepers do to try and engage the animals in captivity. It can take all sorts of forms, such as training sessions or hiding treats in exhibits. One way this is done at the Animal Kingdom is take all of those pumpkins used during Halloween festivities and let the animals play. 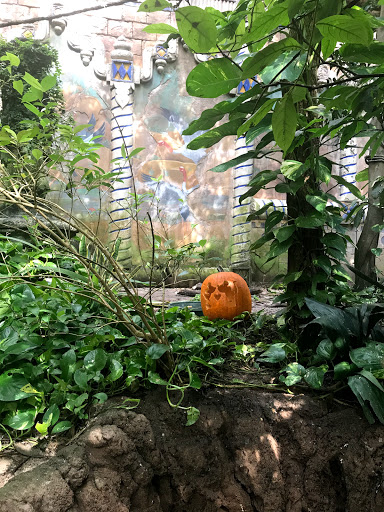 End of Flights: Flights of Wonder is an original attraction, dating back to the park's opening in April 1998. Recently, several rumors have circulated that the show is finished at the end of the year.  According to the BlogMickey, they have received confirmation that indeed December 31, 2017 will be the last show.  However, in further reading these reports, they seem to say a new animal show with birds will be replacing it. This seems more like a new script then something completely different. I believe Guano Joe will be leaving but you will still see many of the birds demonstrate their natural talents. 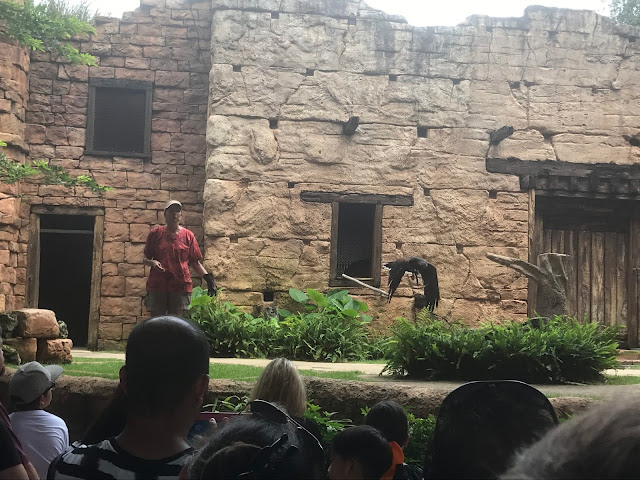 Safari Mike just returned from a trip to Disney's Animal Kingdom and he had the chance to experience the new Caring for Giants tour. He sits down with Dave to discuss this new way to see elephants in the Harambe Reserve.

Also, the time is soon approaching when we dedicate a show or two entirely to your questions and comments. Please email any to jamboeveryone@gmail.com. Enjoy the show!
Posted by JamboEveryone at 4:56 PM 1 comment:


Oasis Bridge Refurb: One of my favorite spots in the park is the suspension bridge that runs into a cave at the Oasis. Most people don't bother going that way but kids love it. Currently, the bridge is under refurbishment until December 16th. 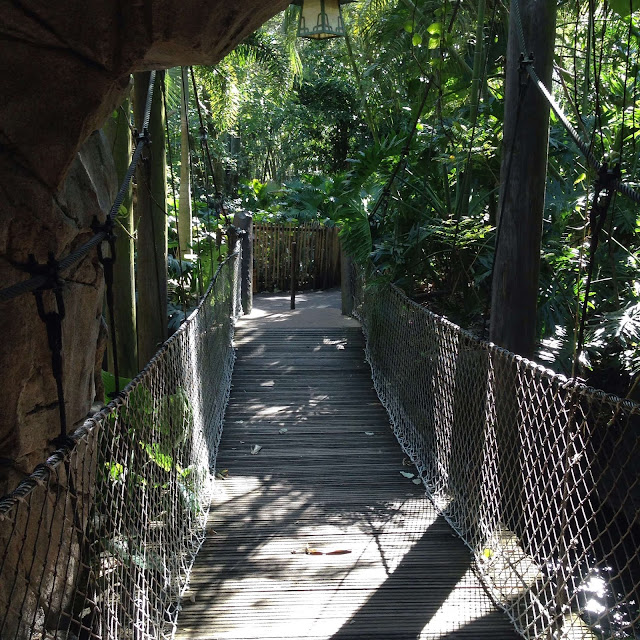 New Food: A new food item has made its way to Flame Tree BBQ. A baked mac and cheese with pulled pork has hit the menu. It also has cole slaw and a couple of onion rings on top. The item is $9.99. 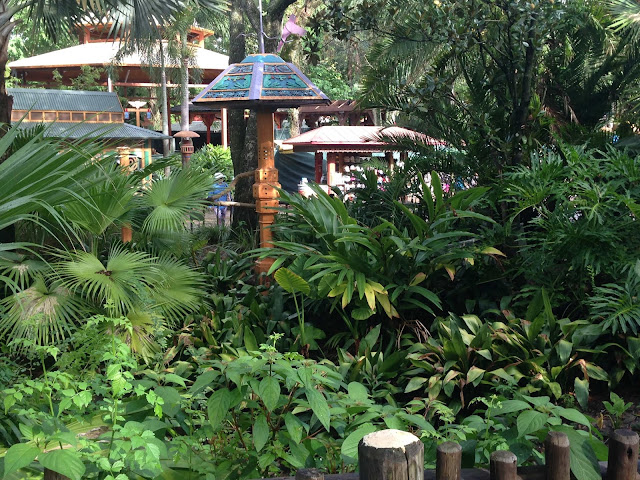 
Avatar Land Model: Over at Visit Orlando's Visitor Center, there is a large model of the Valley of Mo'ara on display. It shows in detail the attractions, the paths, the canteen and Windtraders as well as the floating mountains that don't float. The center is open from 8 am to 9 pm daily. You can find all sorts of information about the various attractions, resorts, hotels and restaurants in the Orlando area. 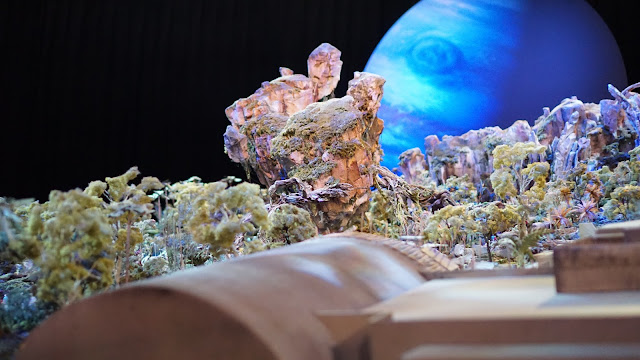 Carnival: Today Disney did some promoting on the parks blog (I know when don't they). Probably one of the lesser known entertainment acts in the park is the Discovery Island Carnival. This dance party with its Brazilian theme takes place every late afternoon. Latin music and colorful costumes are the backbone of this offering. Frankly, I prefer Burudika but hey that's me.

Recently, we did an episode of Radio Harambe on water. That's right, water. There is a lot of water at Disney's Animal Kingdom. 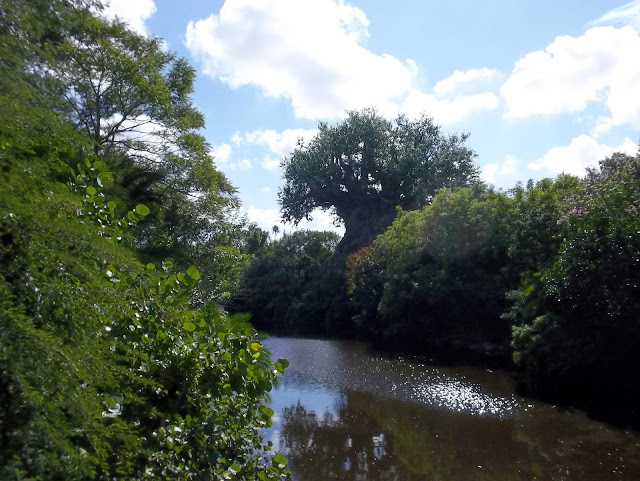 So I wanted to go through some of my favorite ways water is used throughout the park. 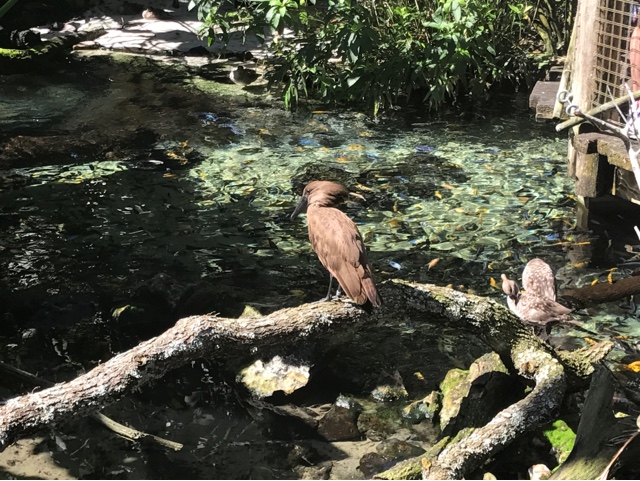 10. Pool at Flame Tree: The food has steadily gone downhill at the Flame Tree BBQ in recent years but this place will always be a great place to relax. It has an incredible view of the lake that sits in front of Everest and now hosts Rivers of Light (more on that later). But it also has this quaint little pool in the middle of some of its seating plazas. The statues lining the pond just add to ambiance. 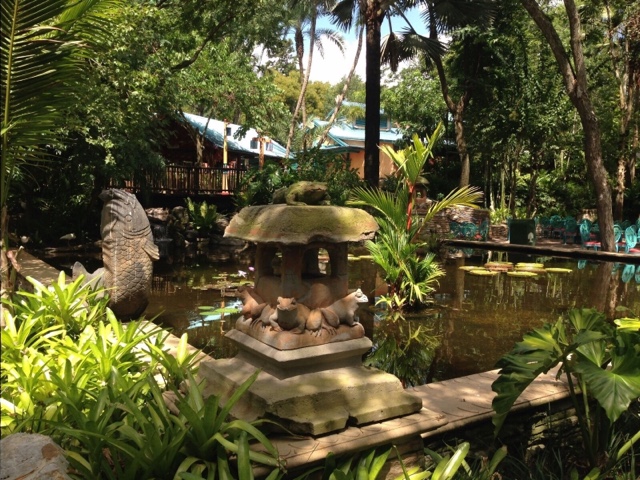 9. Termite at Its Tough to be a Bug: It's Tough to be a Bug is an original attraction at the park and one of its most underrated. To be fair, however, as a 3D movie it can scare little ones. In fact, its easily the most scare inducing 3D movie at any of the parks. One of the big scares is when the termite comes out and talks about how he can spit acid. Well, spoiler alert, he spits on the audience. Water sprays in the back of seats shoot out a light spray of "acid." 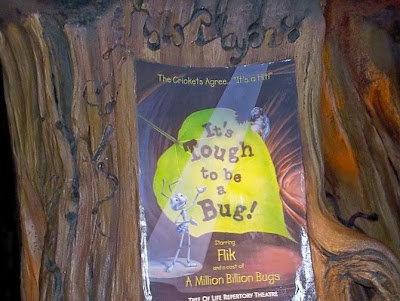 8. Tiger Fountain: The maharajahs knew how to hunt tigers. Unlike house cats, tigers love water. They love to swim and play in water to cool off in the hot steamy jungle. So the maharajahs built a beautiful fountain to attract tigers and shoot them from their hunting blinds. Now, tigers still come but the guests not hunters await the blinds. 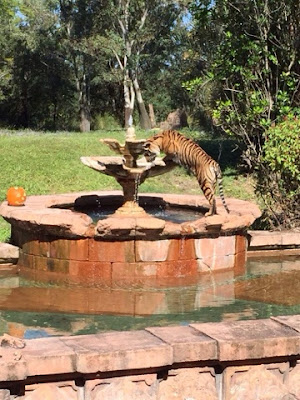 7. Oasis Waterfall: I really love the aesthetics of this exhibit. Located near the cave and bridge at the Oasis, water spills down into a pool filled with water fowl. The soothing sounds of the cascading water and the beautiful ducks and swans make for a calm, nice experience. 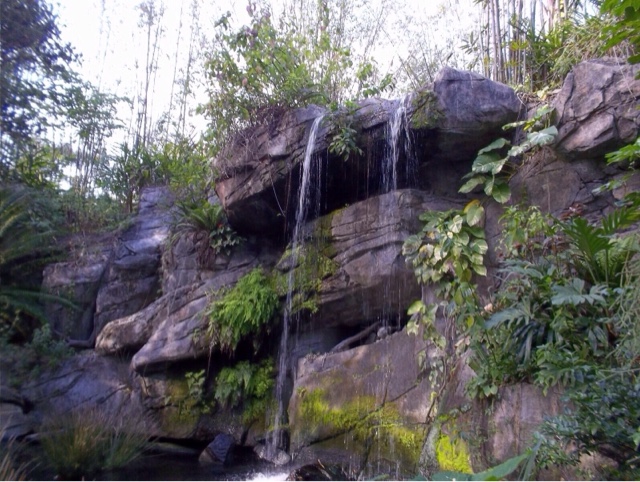 6. Water Cannons on Kali: At the opposite end of calm is Kali River Rapids a water rapids ride. Yes, the whole attraction is based on water. But here, I am highlight cannons. On a bridge near the end of the attraction, guests can operate water sprays to get those guests just a little more wet. It's particularity fun to drench family and friend while laughing maniacally. 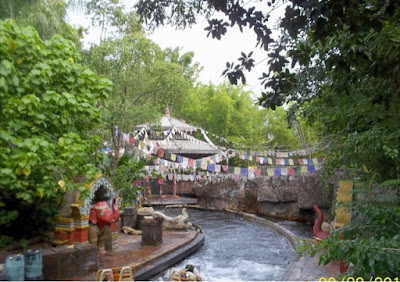 5. Gibbon exhibit: Water is often used as a boundary in animal exhibits. Many animals won't cross water, and if built on the slope couldn't get out if they went in. But few exhibits do such a great job on incorporating water into a beautiful aesthetic. It doesn't hurt that the gibbons and siamangs (both lesser apes and not monkeys) are a lot of fun to watch. 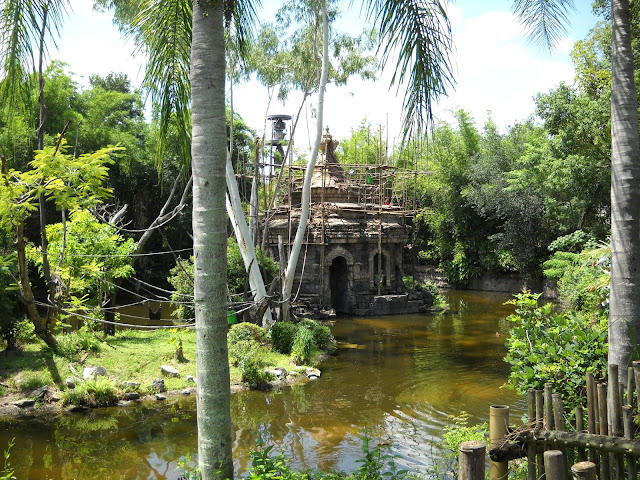 4. View from Harambe Bridge:  I though about putting all of the Discovery River on this list. After all, there are many great spots to take in the river- from the deck of the Nomad Lounge, the path exiting Its Tough to be a Bug, the small seating area at Drinkwallah, but this one is my favorite, especially when the saddle billed storks are gracing its shores. 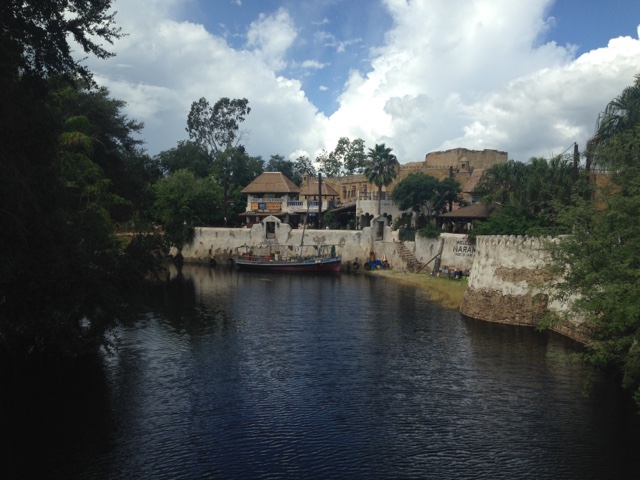 On one side is a great view of the new theater district of Harambe and the other side sports a terrific look at Everest with an aforementioned stork in the foreground. 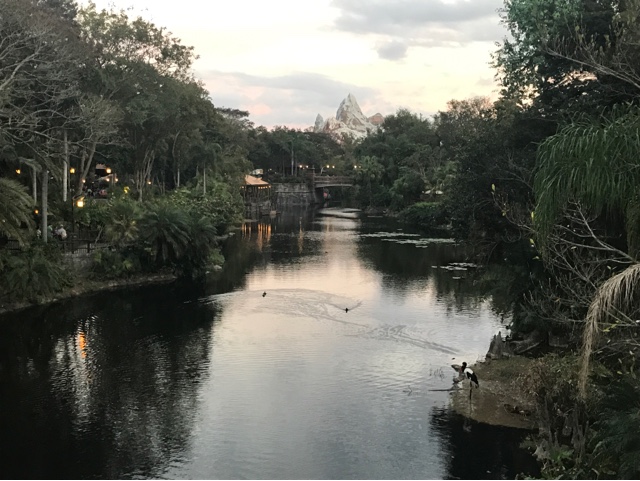 3. Hippo Pool: Few people get to see a hippopotamus under water. There are only a couple of exhibits like this in the world. As you can imagine, its takes a lot of water pumping to keep the water clear enough to view the hippo. And when they move around under water, they are a site to behold. It is a much better view then seeing their backs from the safari trucks. 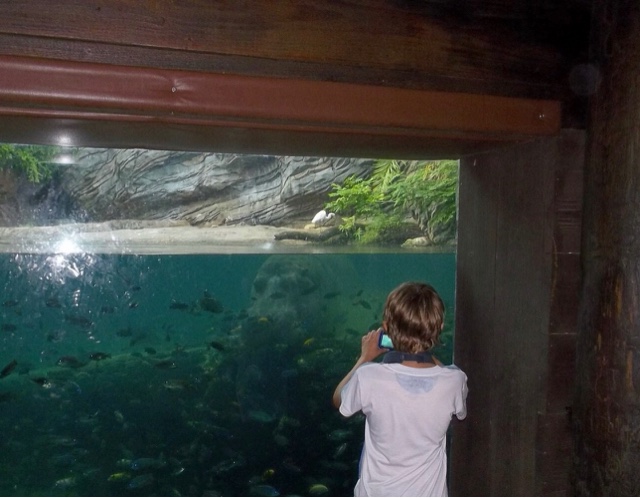 2. Pandora Waterfalls: I know I have been critical of the new land at the park. One thing is for certain though, the use of water is fantastic. This is especially true of the towering water falls. I am a sucker for them 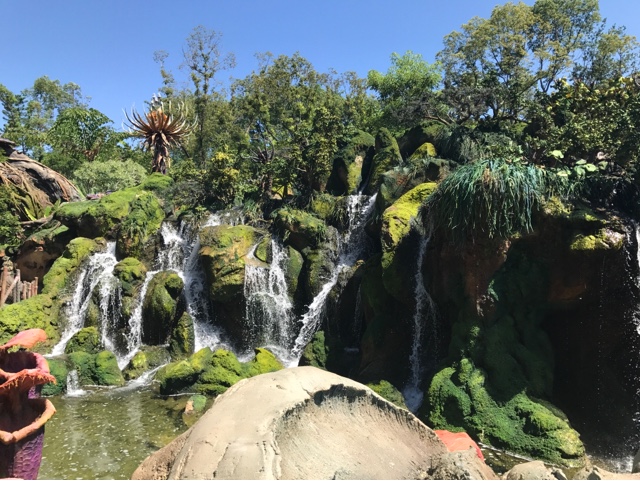 1. Rivers of Lights: I think the best use of water in the park is for the amazing new night time show, Rivers of Light, No matter what you think of the show, the theater is beautiful and its a great use of the large body of water sitting in front of Expedition Everest. 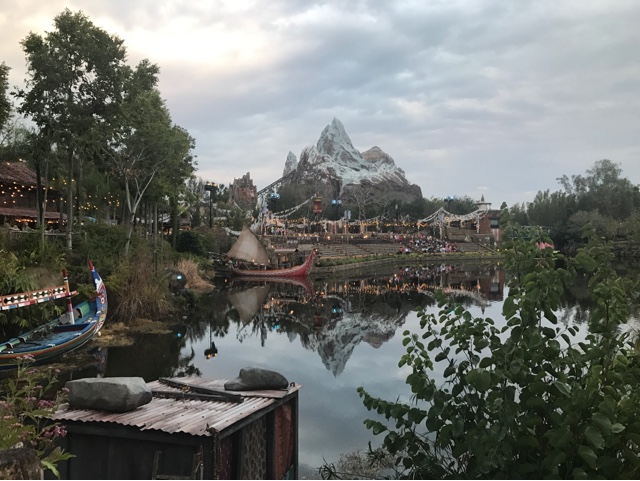 The show also makes great use of lily fountains and water screens, not to mention the boats. 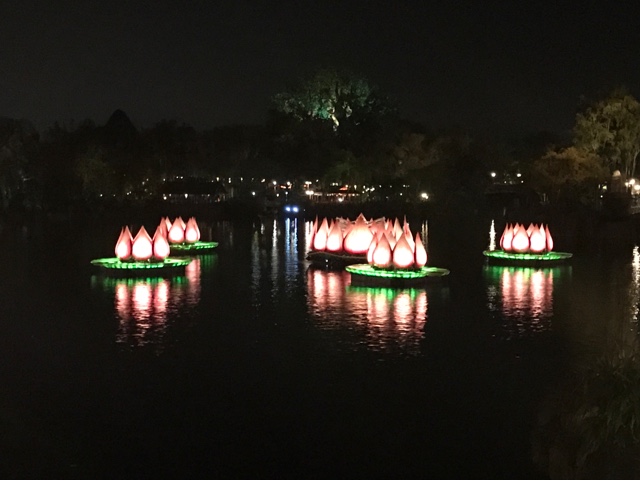 Posted by Safari Mike at 9:07 AM No comments:


More Tiger Cub news: Well, we have names. Jeda and Anala. Jeda, the male cub, was named after the 2 parallel lines on his forehead that resemble a pause button. Hence, his name means "pause." Anala is Hindi for "fiery" or "sizzling." Here is the link to the parks blog for more information. Still no additional information on when the Sumatran tiger cubs will be on exhibit.

Filming on November 4: Due to television crews around the park for upcoming holiday television shows, there will be changes to the entertainment offerings on that date. Winged Encounters, Tree of Life Awakenings and the bands that ordinarily perform on Discovery Island, all will not be available on that Saturday. 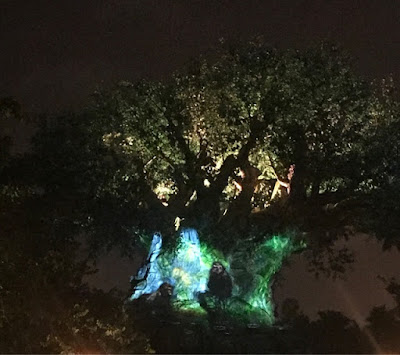