Disney's Animal Kingdom has, in our opinion, some of the best entertainment options in any Disney theme park. There are several music and artisitic shows going on in the streets of Harambe, Discovery Island, and other parts of the park. This guide does not include the big stage shows like Festival of the Lion King, you can find those in the attractions page.  As we continue to try to point out, Disney's Animal Kingdom is not a park for you to scurry from one attraction to the next.  It is a park of lingering, a park to savor. So sit back and enjoy the little nooks and crannies, and street bands. 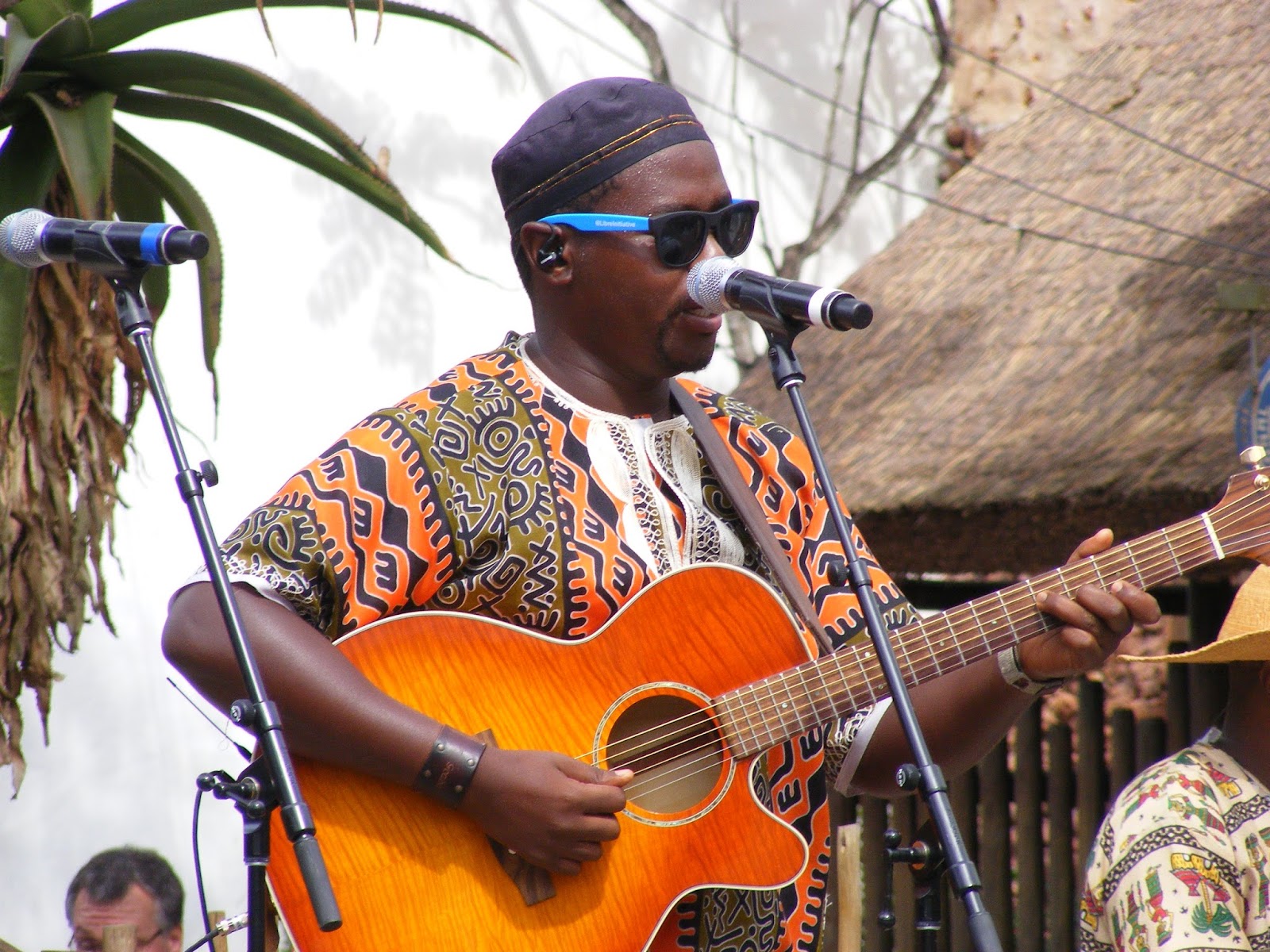 The Village of Harambe is chuck full of entertainment. Like Viva Gaia, the Burudika Band is a street party, with singing and dancing and audience participation. Its basically african music meets modern rock and jazz. They are named for the fake hotel located in the african village, a vintage Disney touch. They typically play four times for a half hour in the afternoon. The times for these change between the days of the week so check your park schedule.  Burudika is, in our opinion, the standard by which all Disney live bands are measured.  They are simply fantastic and must be seen! 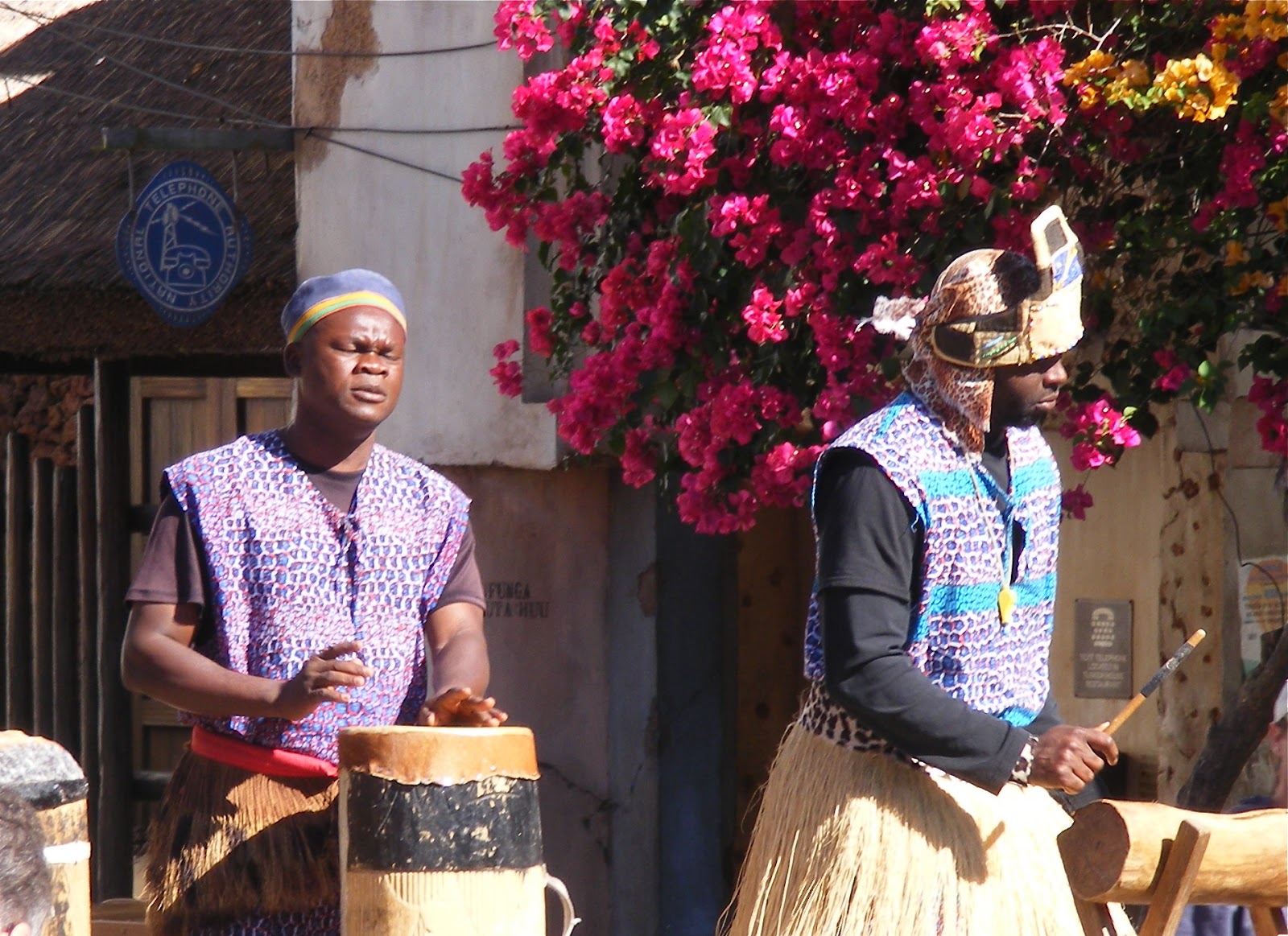 The Tam Tam gang is a five piece drumming group from the Congo, performing traditional African drum music. The rhythmic beats and whistles can be heard from quite a distance. Like many other shows, audience participation is encouraged which in this case means tourists are lined up to shake it along with the drumming. In theory, you are learning African dancing. In actuality, you are just having a good time, as is the audience watching you. These shows are shorter, lasting about 15 minutes, but they are done about 7 or so times a day starting at 10:20 am with the last show being at 3:10 pm. The group plays on the same stage as Burudika 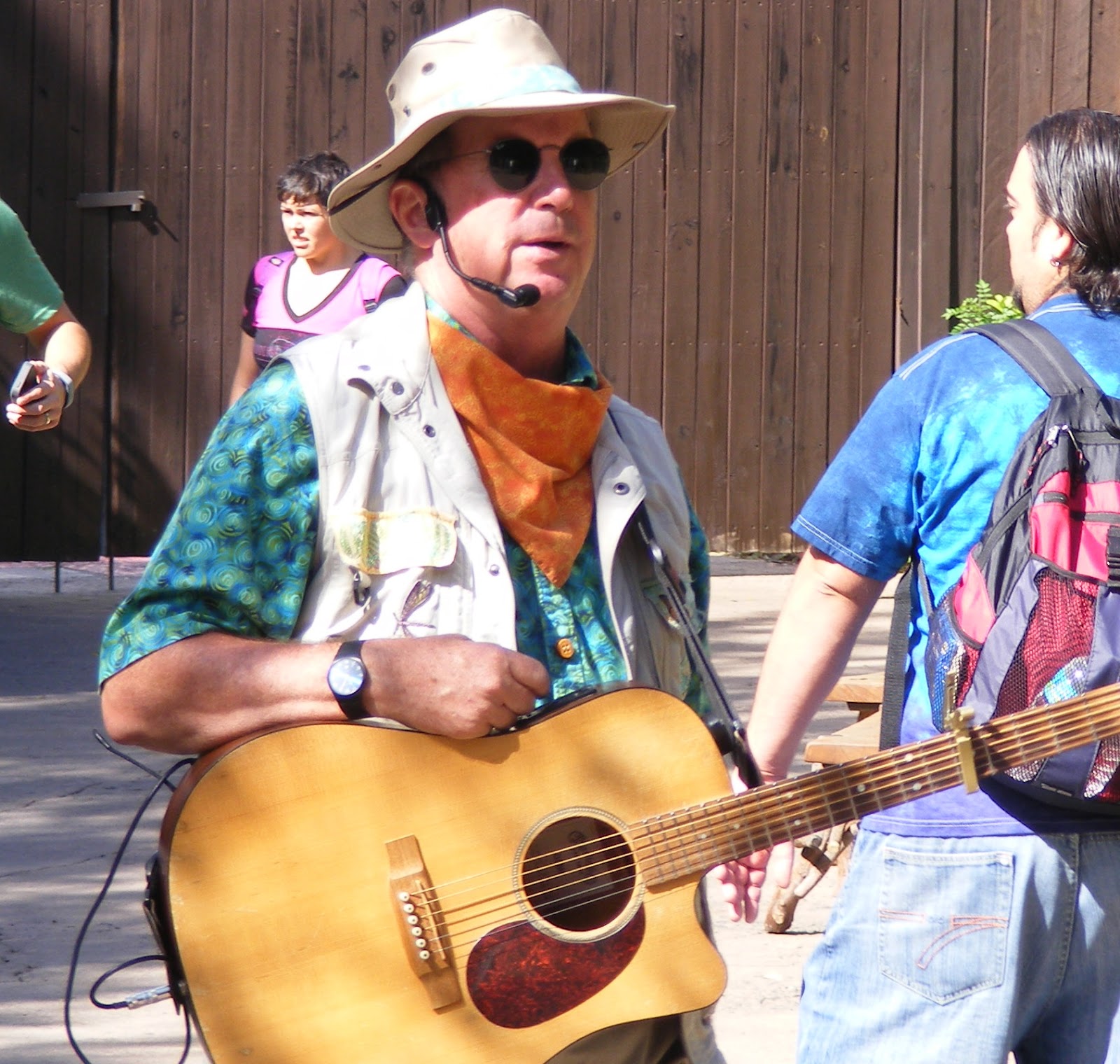 Guitar Dan has been around for some time. He used to play near the exit of the Festival of the Lion King in Camp Minnie-Mickey, but now he plies his trade at Rafiki's Planet Watch. He is basically a guy with a guitar (I suppose his name is really Dan) who plays sing-along kid songs. I remember when my son was two, he had a plush guitar (my son not Dan) and played along. Dan made up a song just for him. Its a memory I will always have. 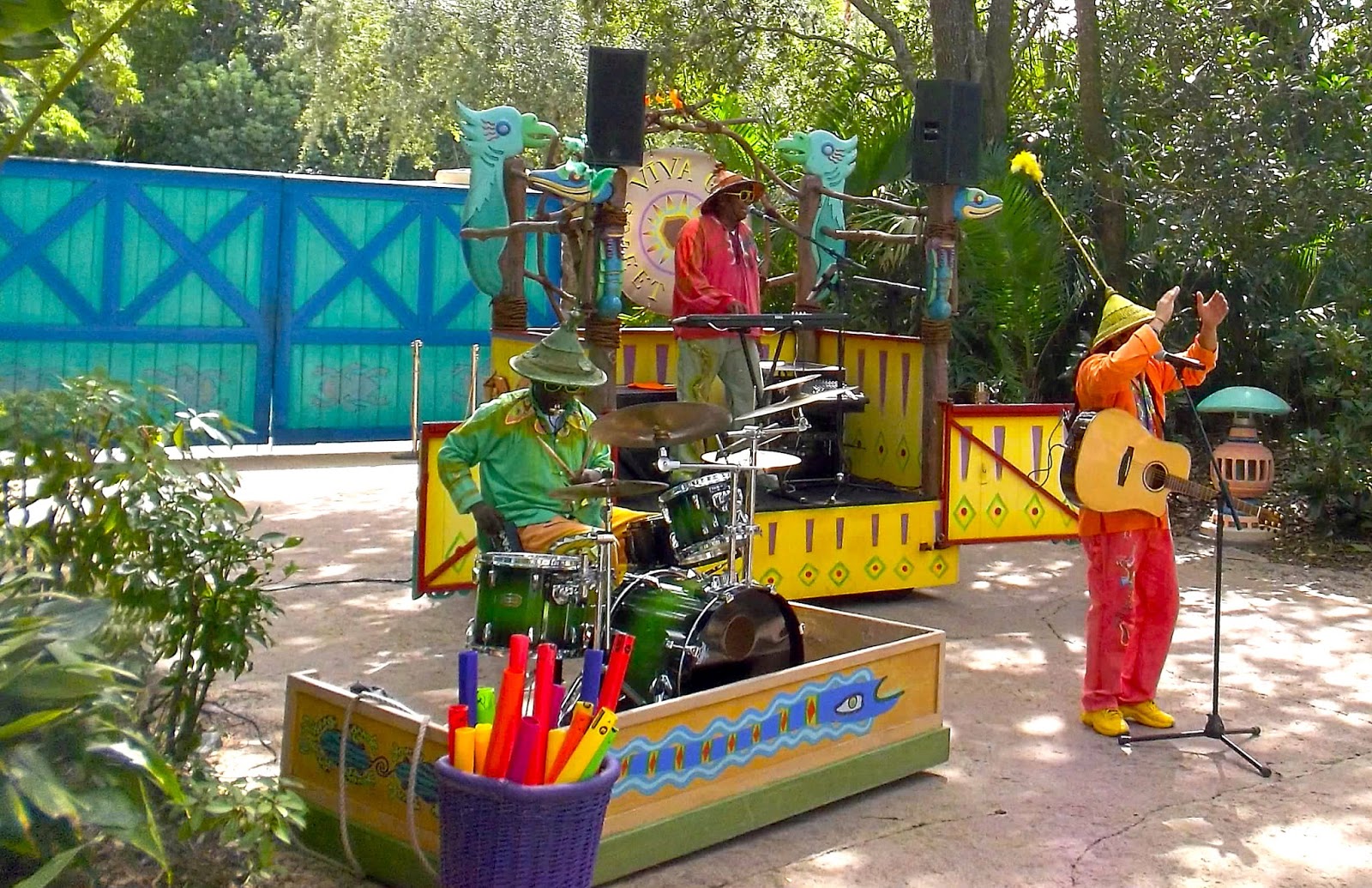 This street band is located at Discovery Island right across from the Flame Tree BBQ just before entering Dinoland. Typically, they play at the top of the hour for thirty minutes. The shows begin at 1pm. These guys are the newest members of the music scene at the park. They began playing for the recent Sundowner event which began in June 2012. They are dubbed as a colorful multi-cultural music troupe leading street party, and that is a fairly accurate description. These guys (and girls) are fun, combining african and caribbean sounds along with a dancer on stilts. I still don't know how they do that. Expect to be asked to dance along. 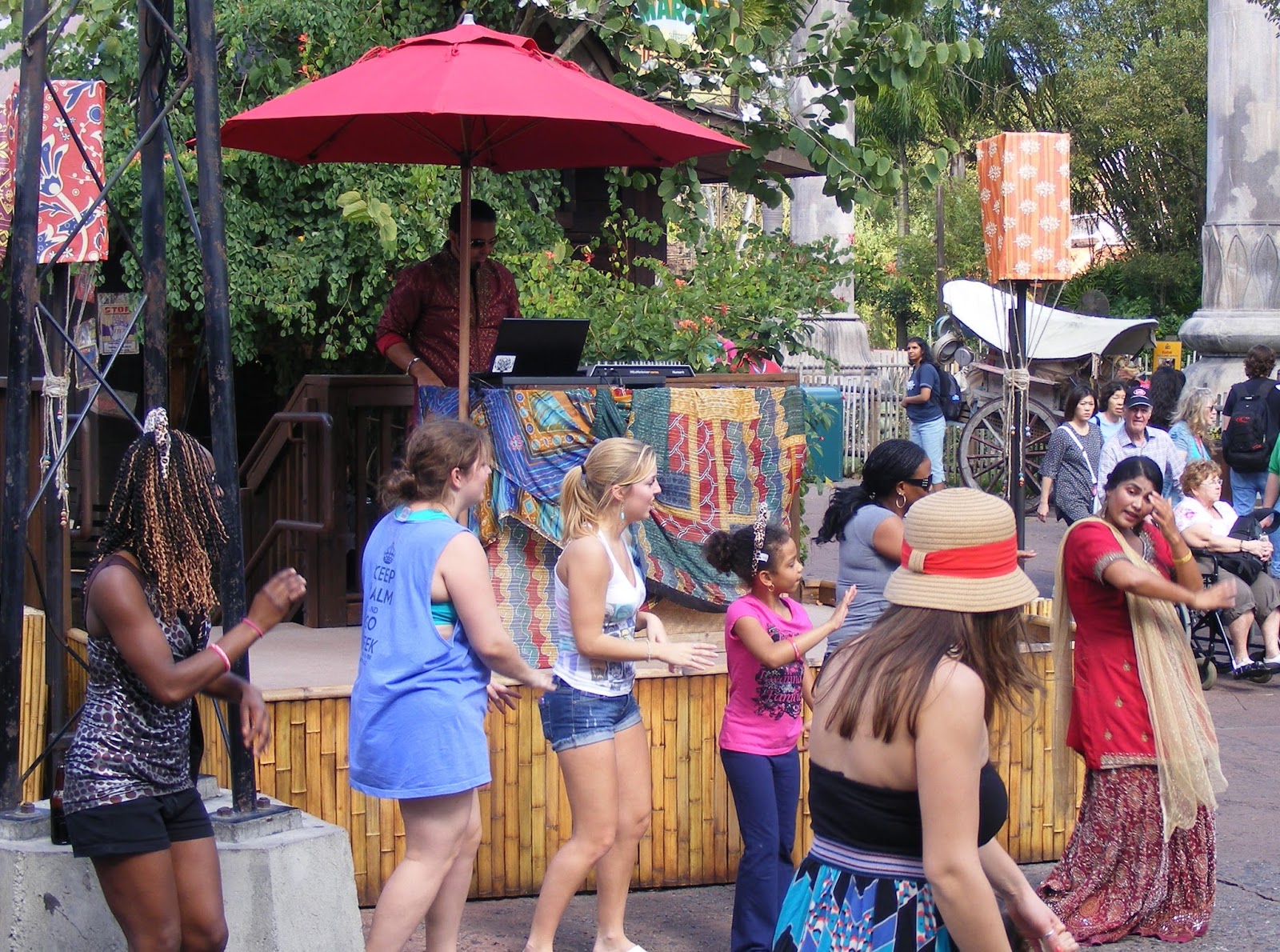 Disney’s village of Anandapur in Asia is a sensory candy store, filled with colorful visuals, delicious smells, and also the music, laughter and dancing of a great street party.  The DJ spins some Indian-style dance music while a female dancer leads the audience.  You won’t pass this performance without hearing some laughter and cheering.  Don’t miss it. 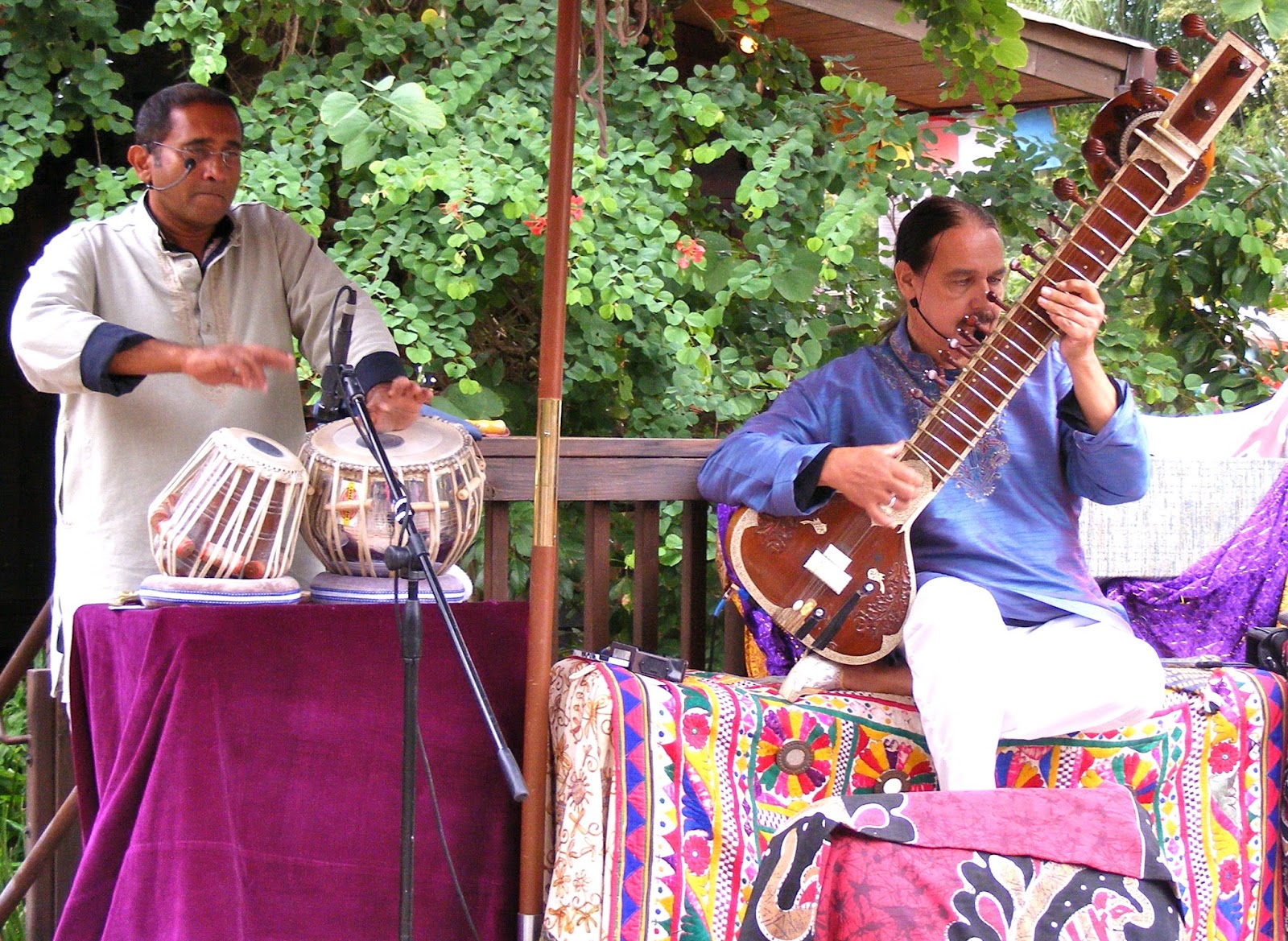 In the shadows of the Forbidden Mountain, nothing sets the mood of Anandapur quite like the haunting sounds of Chakranadi.  This sitar and tabla duo play thirty minute sets of traditional Indian music in the Asia section, normally right in front of the Yak and Yeti.  Check these guys out, they are true virtuosos.  But they are not there every day, so make sure you check your times guide. 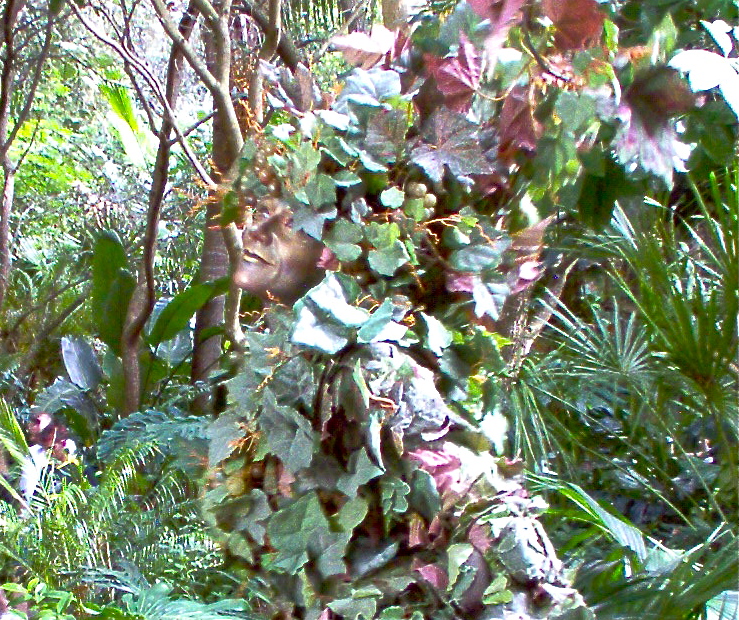 For those not in the know, DiVine can be surprising. Your first clue that something is amiss is the large group of visitors (mostly male) staring at the trees near Harambe on the path to Asia. DiVne is, in actuality, a performance artist. On stilts (a thing at the Animal Kingdom), she is covered in a handmade costume designed to look like, well, a vine. She moves slowly and deliberately to mimick the movement of foliage. Frankly, I just find her to be a roadblock on my way from Harambe to Everest, but many others enjoy her. Check the park schedule for times. Typically, there 6 "shows" a day. 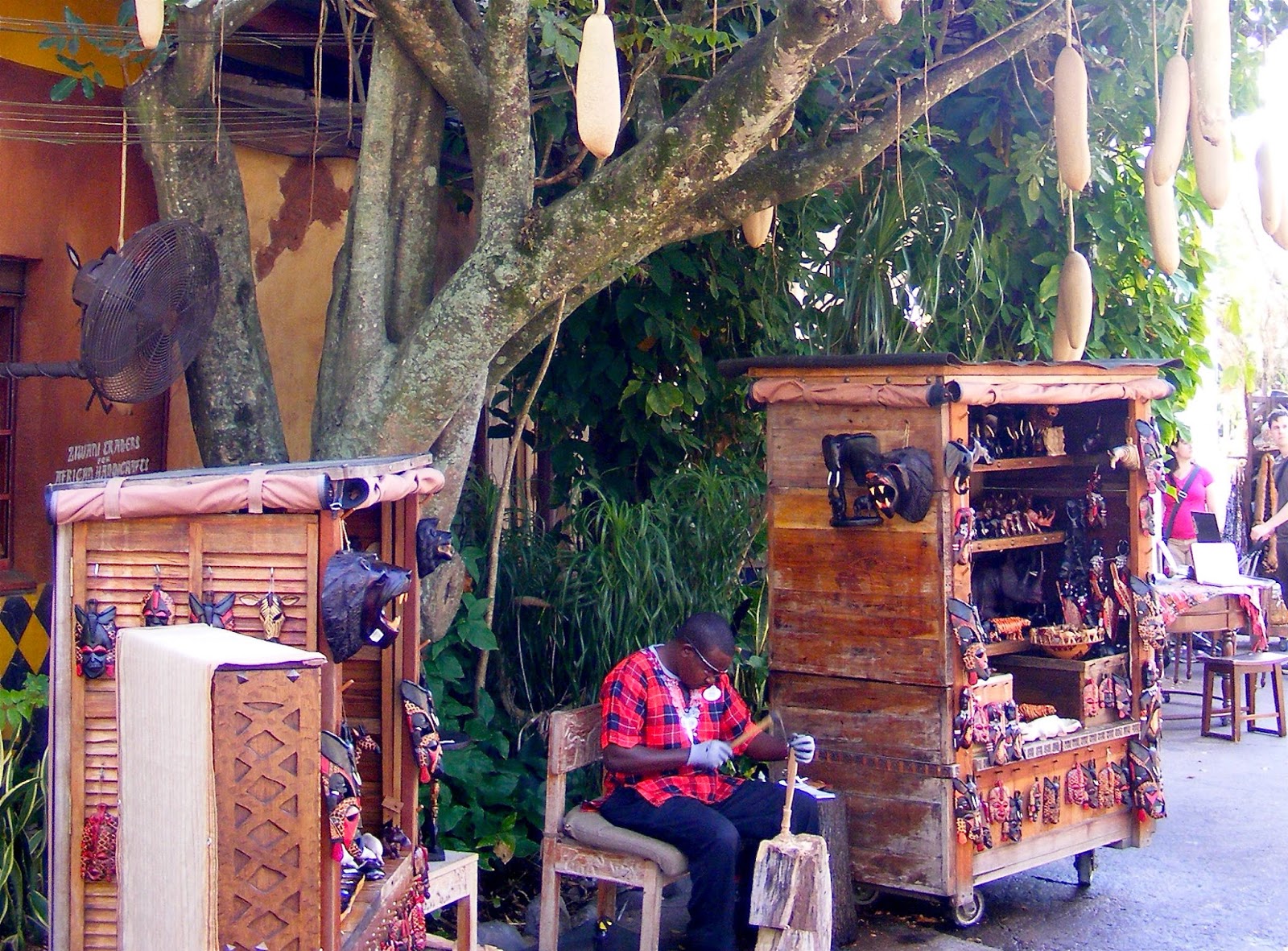 This one is not on a park map or times guide, but it is no less artistic. On most days, you can watch an artist make incredible carvings right before your eyes. The wood carver is set up right out in front of the Mombasa Marketplace in Harambe. The finished products are for sale, as well. Although not cheap, they are beautiful and certainly worth more than a fleeting glance.